One Greek Letter Can Change the Gospel 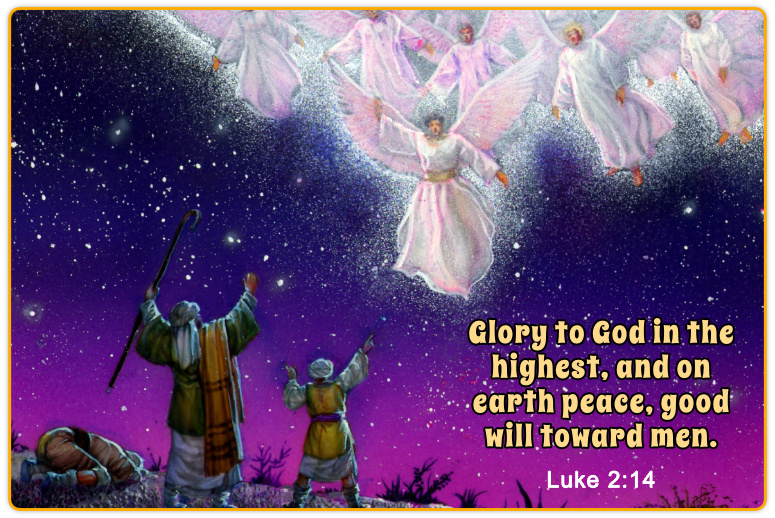 The following is an excerpt from, "51 Reasons Why the King James" by author David W. Daniels.

Can just one Greek letter change the gospel from God-centered to man-centered? You are about to find out, in something as subtle as the announcement of Christ’s birth by the angels in the Judaean hills, in Luke 2.

Believe it or not, one single letter DOES change the gospel!

Did God demonstrate “good will” toward man? Or did God only give “peace” to special “men of good will”? The difference is in which stream of manuscripts your Bible comes from.

Look at Luke 2:14 in the reading preserved through history by believing Christians from the Antiochian, northern stream of Bibles. You can find it in your King James Bible at Luke 2:14:

“Glory to God in the highest, and on earth peace, good will toward men.”

The key word here for “good will,” is εὐδοκία (eudokia). It is written in the “nominative” case. That means it’s the subject of a sentence or clause. So, it is saying that “good will” goes “toward men,” obviously from God.

This shows that everyone is potentially included in God’s “good will.” God’s peace was made available to everyone through giving His only begotten Son. “For God so loved the world that he gave...” (John 3:16).

He loved us so much that He “is not willing that any should perish” but is willing “that all should come to repentance.” (2 Peter 3:9) Jesus came as a good-will gesture to all men. He did not come just to offer peace to those who deserved it.

But when we follow the polluted Alexandrian, southern stream of manuscripts, the scripture is changed to just that! The Alexandrian so-called “scholars” decided to add just one letter. It is called a “final sigma”. It’s a ς (S) at the end of that one word, eudokia. That changes the meaning from “nominative” case to “genitive” case. One way to think of it is like making a prepositional phrase, adding the word “of.”

So the Alexandrian text says this: “Peace among men of good will.” There are a few ways of translating that. You could say those exact words, like the Catholic Douay-Rheims, the Noyes, or the Rotherham Bibles.

Or you could say, “peace among men with whom he is well pleased,” like the 1881 ERV and 1901 ASV of Westcott and Hort, or the 1964 Bible in Basic English. Or you could use the lighter “with whom he is pleased” of the ESV, NAS, the Updated New American Standard, NET Bible, NIrV, NLT and RSV. You could even say, “on whom his favor rests,” like the Catholic New American Bible, NIV (1984 and 2011), Catholic New Jerusalem Bible, NRSV and TNIV.

But wait. I thought that “all have sinned and come short of the glory of God” (Romans 3:23). Then how could some be “men of good will?” Even worse, how could anyone say he or she is someone with whom God is “well pleased?”

Think about those words!

The only one God ever said that about is Jesus, at His baptism and at the mount of transfiguration. Is that saying that there are people on earth who are better than Moses and Elijah, and just as good as Jesus?

Do you see the problems this one letter creates? And yet, it is reflected in almost every single modern and Catholic translation in the world.

“Yes,” you may say, “but does any of that actually affect anyone? It’s just a single sentence from a Bible.” Yes, it does.

I can testify of that because it happened to me! From this starting point, we were taught in Bible college about man’s good will, we were taught against the doctrine of “Original Sin,” and the “fact” that people sin, but are not born away from God. It literally changed the entire doctrine of sin.

As a result of this and other verses, I actually spent time working on a re-translation of Paul’s Epistle to the Romans. I was changing words related to “righteousness” (δικαιοσύνη, dikaiosune) and God accounting us righteous, to God merely “acquitting” us of crimes we had committed. This doctrine made me think that we weren’t sinners in need of a Saviour. We were just overall “good” people who did bad stuff and needed to be forgiven of it. This is completely wrong.

But I worked on this while I was training to be a Bible translator! What kind of translation would I have made? You know the answer: a man-centered Bible, not a God-centered one. And I testify to you that the one factor that led to this in my own life was a single “final sigma” —that one little Greek “S”.

It would have given me lots of agreement from the unsaved, who think that something they do will gain them favor from God to save them.

The Roman Catholic hopes the sacraments will do it. Mormons hope they can keep “the laws and ordinances of the Gospel,” which means a lifetime of obedience to their authorities. Muslims hope that it comes from washings (wudu), prayers, pilgrimage to Mecca, and by some, waging Jihad.

Even agnostics and atheists say, “I am a good person.” But God says, “No, you are not.” Without God’s grace and sending His Son Jesus to be the perfect sacrifice for our sins, we are without hope! And the moment you add a work to “grace,” a gift, it is no longer a gift.

By the way, the Alexandrian Bibles didn’t just stop by adding that final “S”. That southern stream even removed the last sentence of Romans 11:6 you just read, to hide the fact that works stop grace from being grace. Yes, brothers and sisters, it is that serious. Once you start changing the scripture, where do you stop?

This is why we need one Bible, God’s preserved words in our language. These changes are subtle, tiny, almost unnoticed. But they cause a chain reaction that can literally change the gospel from one of grace by God, to one of works and worthiness of man —in a word, Humanism.

Choose carefully from which "Bible stream" you drink.

51 Reasons Why the King James 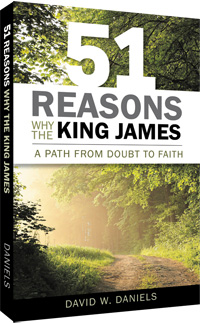 Many people have conquered their doubts. They found reasons to trust that the King James Bible literally preserves what God spoke to and through His prophets and apostles. The confusion of modern versions reveals why there is so much doubt, even of basic doctrines, in the church today.

Reasons for trusting the KJV are many and varied. This book is only a small collection of those reasons, assembled from the dozens of videos I have posted to my YouTube channel. If you seriously consider even a few of these, you will see how destructive the modern Bibles are to faith.

VIDEO: My Path From Doubt to Faith

Learn how I came from doubt in any modern Bible to faith in one Bible, the KJV. God bless you all! - David W Daniels