Can Using 15 Bibles Give Us God's Words? 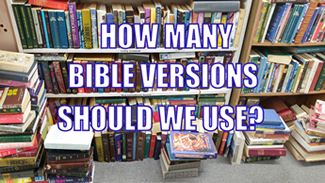 Right now, in almost any church you attend, something occurs that has rarely happened anywhere before the late 20th and early 21st century.

People use more than one Bible.

Rick Warren`s The Purpose Driven Life (2002) set the 21st century stage, using 15 different English translations and justifying it in an Appendix. He wrote, "...I have deliberately used paraphrases in order to help you see God`s truth in new, fresh ways. English-speaking people should thank God that we have so many different versions to use for devotional reading."

15 different translations help you? You may find two or three synonyms, similar-meaning words, in a language, but 15? You`re going to have interpretations - people`s private commentaries - not translations. Want an example?

In Deuteronomy 23:18 God said, "Thou shalt not bring the hire of a whore, or the price of a dog, into the house of the LORD thy God for any vow..." Sounds simple enough. The word "dog" (keleb) is translated "dog" all through the Old Testament. It means "dog," plain and simple. But in modern versions, you get interpretations like these:

This isn`t translating. This is interpreting. They placed their opinion into the text, instead of the words God preserved. A true translator won`t let his personal opinions or interpretations stop him from accurately transferring the Bible concept to the target language.

But most of those 15 Bibles don`t just have changed translations. They are also translated from a changed text. As it says in Did the Catholic Church Give Us the Bible?, historically there are two different streams of manuscripts. The northern, preserved, apostolic stream comes from Antioch, where the disciples were called Christians first (Acts 11:26). But the southern, polluted stream seeps out of Alexandria, Egypt, the home of apostate Jewish and Christian-sounding philosophers.

Scholars from the southern stream took out the words of God they disagreed with and inserted words that fit their opinions. And yet most modern Bibles come from that polluted southern stream.

Bible-believers from the northern stream faithfully passed down and accurately translated the original concepts into other languages, without inserting their own private interpretations. So then, these preserved words aligned with God`s standard.

All measuring tapes in the U.S. have to be calibrated against a standard, kept by the National Bureau of Standards. Jesus said His words would not pass away (Matt. 24:35). He left us a standard, so we can test all other "translations" and interpretations.

An article on Crosswalk.com entitled, "How Do I Find the Right Bible?" ends with the question: "What about you? Which translation of the Bible do you use?" Who cares? Many modern Bible teachers spend so much time talking about using the Bible that they forget the point is to believe the Bible! They can`t all, as one author claimed, "contain the life-giving words of God."

God`s words do not contradict each other.

People use other Bibles but they do not believe them. How can they? They are constantly changed and disagree with each other in crucial places!

But thank God, we have His holy and preserved words in English, the King James Bible, straight from the northern stream. We can believe every word of our Bible.

It has never been a matter of which Bible we use. What matters is which Bible we believe. Whether we use one Bible or 15 from the southern, polluted stream, filled with men`s interpretations, we will only be deceiving ourselves.

An Easy Way to Teach About Bibles

A simple way to teach about the 2 streams of Bibles, that a child (or a PhD) could learn.

Other Articles from November/December 2015: