Without the KJV, Jack Chick’s tracts might have been quite different 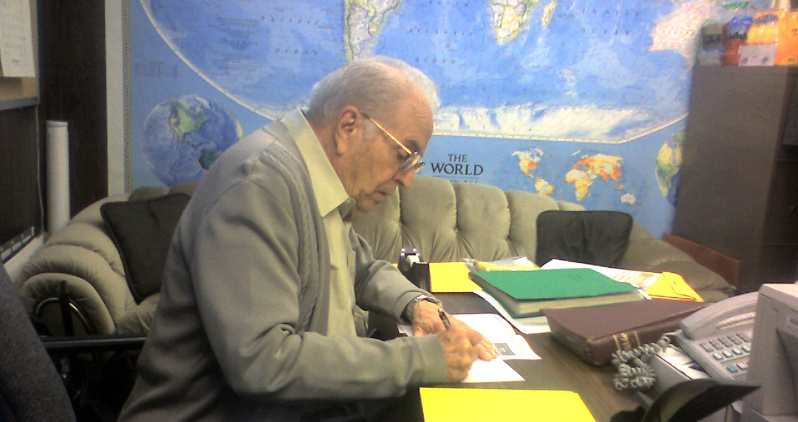 More than 50 years ago, Jack Chick made a decision to use the King James Bible for the scripture references in his tracts. He knew of the KJV’s solid 400-year history and the countless revivals that it helped start.

Some Christians disagreed with Jack and tried to persuade him to use modern Bible versions, contending that they would be easier for an unbeliever to understand.

Jack further explained his decision for the KJV in a letter to Battle Cry readers in July of 2015:

Dear ones in Christ,

Let's take a peek behind the scenes.

We must always remember that the Devil is the father of lies (Jn 8:44). Now, if Satan controls the world system, like the news, media, politics, wars and religions, then we're being fed nothing but lies. The only things we can trust are the words of God.

Ever since the printing of The Authorized Bible of 1611, Rome has cursed its existence. They've been trying for 400 years to destroy it.

They finally pulled it off!

We are now up to our necks in all these new Bible versions, all approved by the Vatican. What was once the beloved, pure words of God are now detested in "Christian" circles.

Everyone's on the band wagon, thanks to Satan's public relations gang. The King James Bible has been smeared and rejected.

At Chick Publications, we trust that preserved Holy Book in spite of the Devil, and will continue to quote from it long after I'm gone!

Your brother in Christ,

To this day, we admire Jack's courage to stand up for the KJV and defend God's Holy Words, despite the vicious attacks. After all, Jesus promised that, "...my words shall not pass away." (Matthew 24:35). We’re just trusting what He said!

If Jack would have given in to pressure and decided to use modern versions, some of his tracts might have been quite different than what we have today.

Want to see a few examples?

Most modern Bibles have a footnote indicating that the entire ending of Mark chapter 16, verses 9-20, are not found in the "oldest and best" manuscripts.

So, this means that Bible publishers have decided to remove one of the only eyewitness accounts of Jesus' ascension to heaven in the Gospels!

If Jack used the modern Bibles, he would not have been able to include the 3 panels in the tracts below. Text highlighted in yellow would need to be removed: 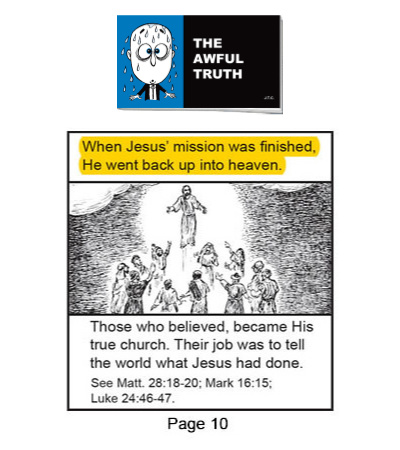 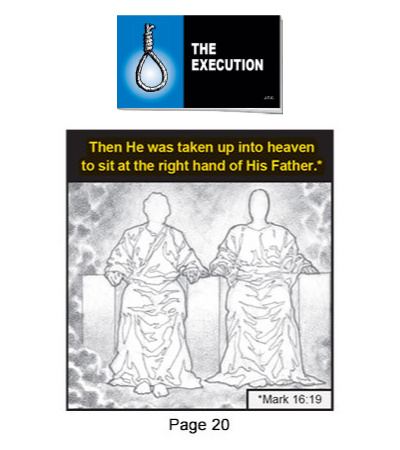 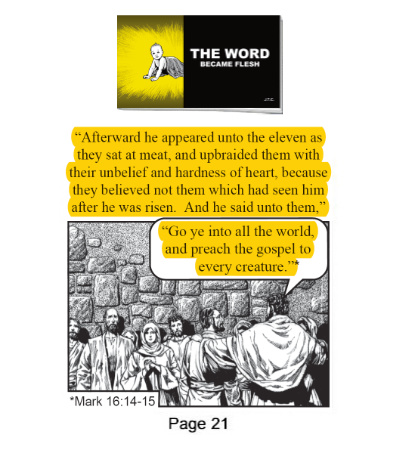 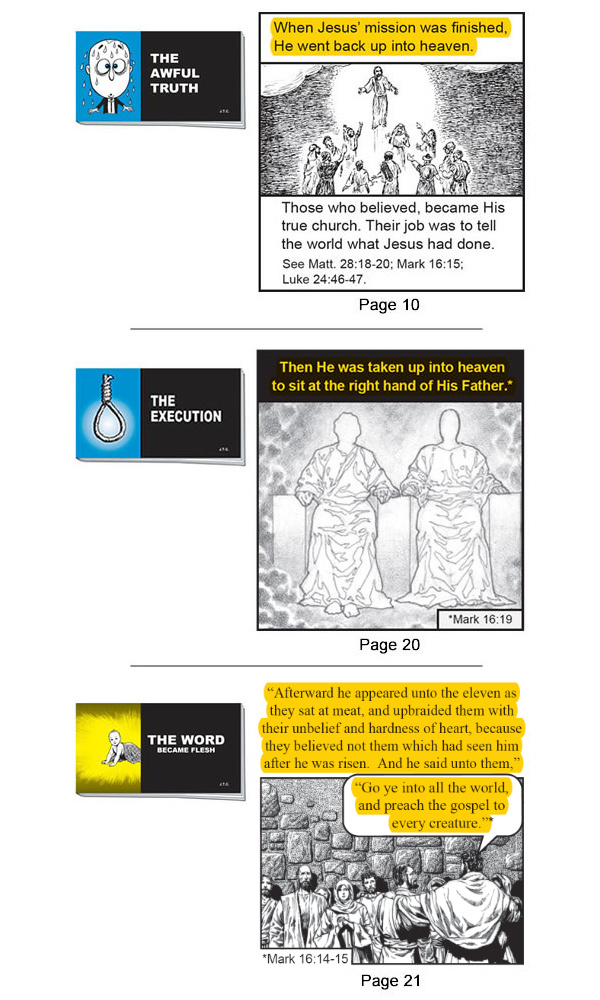 In recent years, Bible publishers have gone to great lengths to separate these verses in Mark from the rest of the text using doubting footnotes.

In reviewing different Bibles for this article, we were shocked by two versions in particular that completely separated these verses from the rest of the text (almost like a disclaimer!) and put them in a different section, as if to say, “Dear reader, you can’t trust these verses and we don’t even believe they belong in the Bible!)

Translator's Note:
"Verses 9-20 are not included in some of the earliest surviving Greek copies of Mark and have significant stylistic difference from the rest of Mark’s Gospel."

Translator's Notes:
“Endings added later.” & “In most critical editions of the Greek New Testament, the Gospel of Mark ends at 16:8.”

What a disgraceful diminishment of God’s Holy Words!!

In August of 2000, the Lord guided David W. Daniels to Chick Publications (Watch David tell the story on YouTube) to work with Jack and to be his helper and researcher, particularly in defending the KJV and its history of preservation. David has written many books since then to help Christians see that God did preserve His words and that they can be found in English in the KJV.

In 2015, while praying about what topic to discuss in his next video, David was convinced that the Lord wanted him to look closer at the manuscript that scholars point to most when deciding to remove these and other verses from modern Bibles. That manuscript is —Codex Sinaiticus.

This research resulted in a multi-year journey that led to discovering:

Bible "scholars" claim the Sinaiticus is the world’s oldest Bible, and discard the Textus Receptus of the KJV. And so modern Bibles are based on the Sinaiticus, changing or removing verses because of it. But the evidence shows Sinaiticus is actually a 19th century fake!

If Jack had trusted modern scholars and their Bibles to determine what Bible he should use, he would have been working from a faulty foundation.

You can follow the evidence yourself in the books below by David W. Daniels: 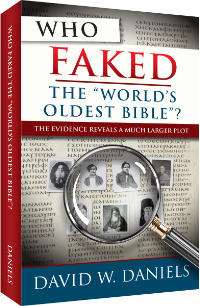 The crime is fraud, and you’re the detective! If the devil has cooked up a plot against your Bible, would you want to know it? In this book, you'll discover the evidence that reveals a much larger plot. 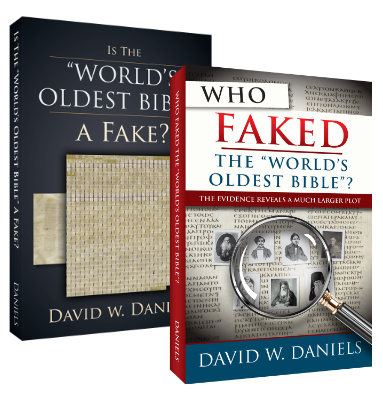 Get both of David’s books on Codex Sinaiticus, the manuscript that scholars claim is the "World’s Oldest Bible". Learn the facts of history and see for yourself that it's really a modern fake. You save $5! 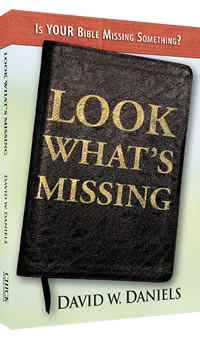 For years, publishers have been removing words, and even whole verses, from modern Bibles. What's missing from your Bible? Take a look!