Did God Plan a Do-It-Yourself Bible? 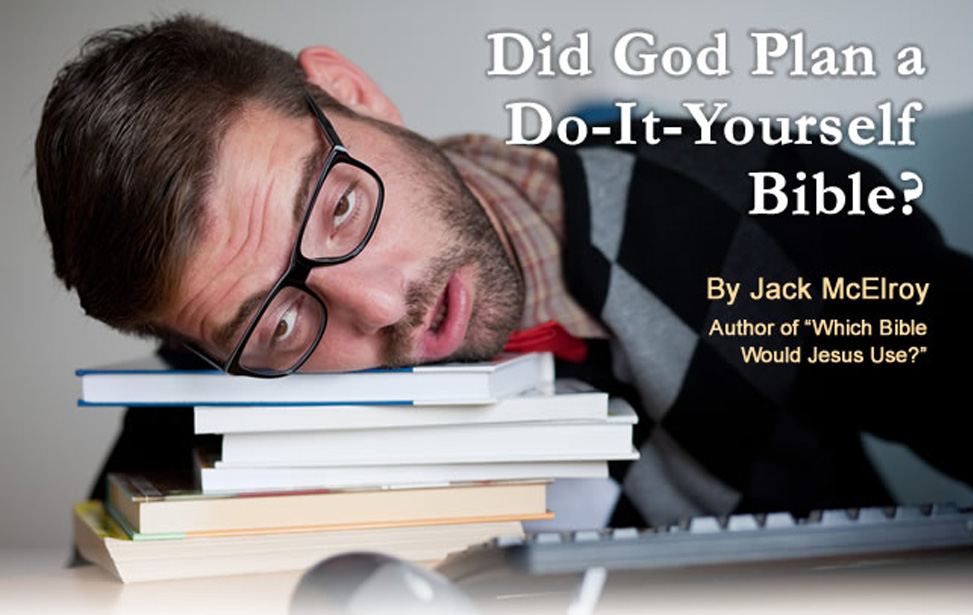 Do you think the Lord cared enough about His holy words to preserve them in a book His own children can read and believe today?

I believe He did. But which book?

Most fundamental Bible College and Seminary professors and many pastors trained under them were taught...

1. That the original words God inspired are now lost. But they are now supposedly preserved in a big pile of original language manuscripts, ancient translations and quotations of the text. And...

2. It's the scholars' job to "reconstruct" what God originally said —although no one can be 100% certain that any reading is 100% authentic (you'd have to have the original manuscripts to know for sure).

Do you know where you end up when that's the "Bible" you're supposed to "be a serious student of?"

To get your hands on such a Bible to read and study, you'd be forced to:

1. Master many ancient languages (not just ancient Hebrew & ancient Greek).
2. Master the "science" of textual criticism (assuming that modern textual criticism is a science —which it is not) in order to sift through the entire documentary evidence.
3. Learn how to read and decipher the various and sometimes contradictory readings —all in an attempt to somehow:
4. Reconstruct the "original autographs."
5. Then you're "good-to-go" to create from your own personal opinion a "Bible" to study.

Do you really think these are the hoops the Lord wants you to jump through just to figure out what He said? But this is exactly why there are so many versions of the Bible and why they all say and mean different things.

I believe in a real Bible —a book that exists—and it's not hard to find, either. In fact, the Lord has preserved such A Book for you.

It's a book that's sold billions of copies and has a 400-year history of eternal results; a book that, according to Winston Churchill, "has been translated into more than seven hundred and sixty tongues."

It's a book that's changed countless lives of those who read it and just believed that it was the very words that God wanted us to have.

Which Book? It's the Authorized Version of 1611, popularly known as the King James Bible.