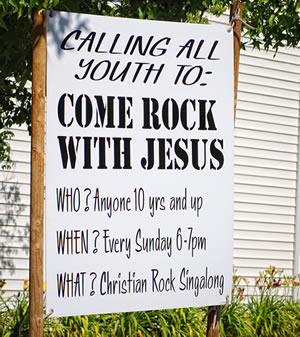 The atheists are on the move. Where they have not succeeded in removing the Ten Commandments from government property, they are demanding equal space for "secular" monuments. Billboards are appearing across the country declaring: "Don`t believe in God? You are not alone." This is just more evidence that our culture is marching away from the biblical foundations that made America great.

A recent article by Larry Taunton in the Atlantic magazine brought the issue directly to the doorstep of local churches. Called "Listening to Young Atheists: Lessons for a Strong Christianity," it reports on a nationwide survey conducted by his organization, Fixed Point Foundation.

Taunton invited members of campus atheist groups like Secular Student Alliances (SSA) and Freethought Societies (FS) to answer one simple question: What led you to become an atheist? He was surprised by the response.

"Since the New Atheism fashions itself as a movement that is ruthlessly scientific," says Taunton, he expected that the first answers would "attribute the decision to the purely rational and objective."

But when he got them to tell their stories, a different picture emerged. One young man typified the general path to unbelief: Phil had grown up in church, active in the youth group. Things went well under a mature youth leader who "knew the Bible." However, the church administration began to pressure the leader to avoid "boring" the kids by injecting more fun into the activities.

This led to a change in youth leaders and Phil decided that Christianity was unserious because the leadership appeared to lack a strong belief. Entertainment had been substituted for biblical answers to Phil`s big questions. "Church became all about ceremony, handholding, and kumbaya," Phil said with a look of disgust. "I missed my old youth pastor. He actually knew the Bible." Taunton then asked when Phil began to think of himself as an atheist. "By the end of my junior year," he remembered.

He seemed surprised when Taunton pointed out that that was about the time the youth leader was fired.

Taunton says that most of the young atheists had come out of churches whose mission and message was vague. Clear biblical answers to their questions were clouded by emphasis on "social justice," community involvement, or just "being good," with few connections to Jesus and the Bible.

Most of the respondents felt that church offered only superficial answers to life`s difficult questions. However, they seemed to hold in respect anyone who genuinely took the Bible seriously. One political science major at Dartmouth told Taunton: "I really can`t consider a Christian a good, moral person if he isn`t trying to convert me."

This study shows that, in these chaotic times, our young people want solid, biblical answers to life`s big questions and we often feed them with fun, instead. These young atheists quickly saw that leaders in their churches were only half-hearted in their beliefs.

This was a turn-off to serious-minded young people trying to make sense of the world they are growing up in. They did not choose atheism by logic and reason, but by an emotional reaction to the hypocrisy they saw.

Chick tracts may engage the reader with a good story, but then presents no-nonsense, biblical truth. Hell is one example. Seeker-friendly churches, preaching easy believeism have failed to teach the awfulness of eternity in fiery torment. God called Chick Publications to counterbalance this with tracts that present the whole gospel of both heaven and hell. Parents tell us that, when their youngsters grow up reading Chick tracts, their foundation in biblical truth is strengthened. In addition, two books by Rick Jones, "Stairway to Hell" and How to be a Successful Teenager, provide additional help for parents trying to shepherd their kids through today`s minefields of evil in our culture.

Other Articles from September/October 2013: