On August 19th, 2009 at 2 pm in the afternoon there was a very interesting meeting that took place at the Minneapolis convention center in Minneapolis, Minnesota. The national ELCA (Evangelical Lutheran Church of America) was scheduled to consider a "Proposed Social Statement on Human Sexuality." The issue was whether practicing homosexual behavior should disqualify a person from the pastoral ministry. 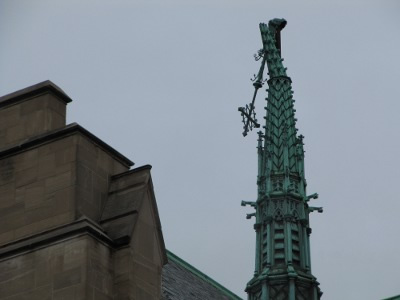 Which then, very conveniently, opens up a Pandora's Box of validation for pastors to marry two ladies, or two men, or a lesbian and a bisexual, and a straight person, or a gay, and a transgender or whatever suits their fancy. God was not too happy with their meeting that afternoon and just a few minutes after two p.m., God sent a wake-up call to a very liberal ELCA meeting.

On a day when no severe weather was predicted, which baffled the weather experts, a tornado touched down just south of downtown Minneapolis, Minnesota and followed 35W straight towards the city center. It crossed I94 and hit the convention center where they were having this meeting, punching a hole in the Minneapolis Convention Center roof.

Across the street from the Convention center was a very liberal Evangelical Lutheran Church that people were using for their worship services that week. The tornado split the church's steeple, causing the cross on top of the steeple to tip completely over, dangling in midair.

I was sickened to say that the vote did pass 66.67% (too close for comfort to the 666 mark of the beast) to allow what I would call the devilish spirit of homosexuality to be welcomed in every ELCA Church in America and opens the door to other churches and denominations to do the same.

The Christian Post commented: Had Jesus Christ Himself come down from heaven and unfurled His white, heavenly robe before the entire assembly to reveal all the secrets of the universe, and had He lovingly addressed the ELCA assembly, telling the pro-gay lobby that they were mistaken in their interpretations of the scripture, that homosexuality should not be un-sinned, but that His death on the cross covers the sin of homosexuality, and to repent and be saved, some learned theologians from an esteemed ELCA seminary would have interpreted Christ's visit in a manner consistent with the outcome they desired.

In fact, after the tornado hit, one GLBT (Gay, Lesbian, Bisexual, Transgender) advocate rose to proclaim that the upside down cross on the cathedral steeple was a sign that the Holy Spirit was blowing through the assembly in big ways as they embarked to do a "new thing."

Bishop Michael Ingram is now confident that the Anglican Church of Canada will soon be blessing same-sex marriages and ordaining practicing homosexuals as ministers. He sees no problem in rewriting the Bible, the basis of the Anglican religion, so that its teaching will conform to the wishes of the activist homosexuals. The American Family Association had this to say: "As confusing as homosexual advocates try to make this issue, Bible-believing Christians had better get used to such verbal sleight-of-hand. And they had better prepare themselves to it, because the arguments of "gay" advocates are creeping into virtually every denomination."

Other Articles from January/February 2019: