From the Front Lines

With millions of paper missionaries in dozens of languages shipped each month, testimonies come back to Chick Publications from all over the world. Here are some sample reports from St. Louis to Zimbabwe. 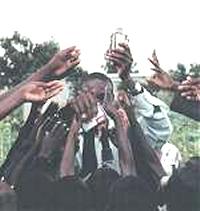 The photo at right is typical of the hunger for the gospel in many parts of the world. It was sent to Chick Publications by Richard Davis who works with Every Home for Christ. In Zimbabwe, Africa, 100,000 Tonga people live on a remote river valley accessible only by 4-wheel-drive vehicles.

Swarms of malaria-laden mosquitoes greet anyone who ventures near the Zambezi River that has the highest death rate from malaria in the nation. Yet, the first organized outreach to a Tonga village in October 1999 found hearts receptive to the gospel. Approximately 800 adults and children accepted Jesus as Savior.

Chick Publications has worked with many African missionaries to translate Chick tracts into some of the most remote African languages including Tonga. A Why Is Mary Crying? tract is a real novelty.

Like the rest of the world, the Congolese love outward and ceremonious (dead) religion. So, it's a blessing when they hear and believe. Perish the day if I ever grow weary of preaching the truth to a crowd of wide-eyed souls who listen with interest. God wanted me there that day, for the next day, I was in and out with my diesel in 30 minutes.

A Tract Was His Only Bible
Many Latin American cities have big "religious" street parties similar to the New Orleans Mardi Gras. Danny Callis works with local pastors in Brazil to reach the crowds of revelers who participate in the debauchery often associated with these events. Callis sends this email report from an outreach to Camacari, Brazil:

Thanks once again for praying for the evangelism during the "street party" in the city of Camacari. About 60 to 70 Christians participated, with around 300 people coming to Jesus.

A man that had accepted the Lord last year during this event and that lives in another city showed up just to find the Christians and show them that he was still following Jesus. His appearance had changed for the better and he was happy. He asked for and received a Bible, saying that all he had for a "Bible" was the tract we gave him last year.

We appreciate your prayers, especially because of the results, but also that nothing harmed the Christians during the violence that happened during this party.


Todd Roper, who works with Danny Callis in the "street parties," describes how he uses the Chick tract One Way! to get new Christians started sharing the Gospel. First, he gives them a copy of the tract to read. Then he asks if they understood it.

If they say something like "more or less" he then explains each page to them. "For example," says Roper, "On the page where God is building a wall, I say that the couple were expelled from the Garden and a barrier made so that they could not get back to God by just any way. God is the One who decides how men are to come to Him. There is just One Way."

Roper says he has been amazed how quickly a new Christian learns the presentation from just one hearing. Then, with a pack of ONE WAY! tracts and the learned presentation they are off and running as soul winners. "I know that they can faithfully pass on the story to others," says Roper.

Roper also reports that he was told by one of the outreach leaders at a street party that about 30 percent of the police assigned to patrol the event have become Christians. "She attributed it to the "little books," saying that we just don't know how much those tracts are doing."

Roper says that the teams make a special effort to get tracts to the police and let them know that they are praying for them. Their job is not easy, with all the violence, drunkenness and perversion in these events.

This is how it works. I take several hundred to a couple thousand copies of The Slugger. Head to the ballpark and buy the cheapest ticket (standing room only, preferably). Watch the game and put tracts at every refreshment stand, and men's room (the clandestine part).

As the top of the 9th inning starts I go to the end of the standing room only section in the top level and offer every person in each SRO section a tract - quickly - and then go outside of the stadium and wait.

When the game is over and fans are leaving I distribute tracts using lines like, "Do you like baseball? The Word of God goes home with and gets read by hundreds or thousands of fans.

The combination of the fan interest in slugging, the fan appeal of the tract The Slugger, and my personal knowledge, experience and interest in Major League Baseball makes this a very enjoyable way to share the Good News.

Other Articles from May/June 2001: