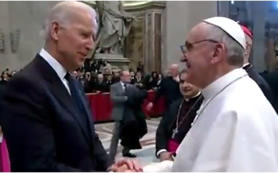 The new Jesuit pope continues his campaign for unity of world religions but now has spoken in favor of the forces driving toward one-world government. In spite of the obvious failure of Marxism in the Soviet Union, China, and many Latin American countries, Pope Francis called for more government control over business and the economy.

The 84-page document called "Evangelii Gaudium" (the Joy of the Gospel), is written in typical papalese with a nod to Francis`s down-to-earth style. He has become much admired for his frugal life style and special attention to the underdogs. Early on he washed the feet of some women in a shelter and hugged a particularly repulsive disfigured man.

This is his first official "apostolic exhortation" and carries less weight than an "encyclical" but is considered to set the tone for his overall plans for his papacy. Like other proponents of socialism, he instructs the wealthy to share with the poor and urges governments to take control of the process. He decried the "idolatry of money," and called on politicians to "attack the structural causes of inequality," and provide work, healthcare and education for everybody.

In all fairness, he calls out the pervasiveness of corruption in most of the countries of the world but again looks to governments and the Catholic Church to fix it. This could be expected, however, with him being the first Jesuit pope. A little digging in some obscure corners of history reveals that the Jesuit Order has been neck deep in politics all over the globe almost from its beginning.

Ex-Jesuit Alberto Rivera details in the Alberto Crusader Comic series how the founder of the Jesuits, Ignatius Loyola, was first commissioned to stop the spread of the Bible during the Reformation. But when that failed, Jesuit missionaries spread across the globe infiltrating high levels of governments to bring the countries under control of the pope.

This did not work well in Western Europe and North America because of the influence of the King James Bible and its exposure of Rome`s pagan idolatry. They also failed to get traction in Asia where they were expelled from Japan, China and India when their cunning became obvious. In fact, history records several dozen countries have temporarily expelled the Jesuit missionaries.

It is interesting that Pope Francis comes from the one area where Roman Catholicism has thrived, much to the detriment of the people —Latin America. The mixture of politics and religion that surfaces in his "apostolic exhortation" is commonly known as "liberation theology." For decades, Latin American Catholic leaders have promoted this socialist agenda. Today, most of the countries there are in turmoil because of this political philosophy.

Missionaries tell us that it is increasingly difficult to establish true gospel work in countries like Venezuela because of government domination.

This global move to look to the government instead of Jesus for salvation is further evidence that the time of the Beast of Revelation 13 is near.

World leaders are becoming increasingly arrogant in their refusal to humble themselves before our Creator. They refuse to recognize the truth that, "Righteousness exalteth a nation: but sin is a reproach to any people." (See Proverbs 14:34.)

Chick Publications has tried to produce gospel tracts that will speak to the coming turmoil described in Matthew 24. Jesus said that the gospel would be preached to all nations, and then the end would come. Tracts like The Beast, The Poor Revolutionist, Somebody Angry? and Last Generation speak truth in the middle of today`s confusion and the coming chaos.

We need to generously plant these gospel seed so that the Spirit can water them and God can give the increase.

Other Articles from January/February 2014: