Pope Francis continues to woo Muslims into Rome`s ecumenical clutches. In a recent "wide ranging interview" with a French Catholic newspaper, La Croix, he compared Islam`s "idea of conquest" with the Great Commission in Matthew: "It is true that the idea of conquest is inherent in the soul of Islam. However, it is also possible to interpret the objective in Matthew`s Gospel, where Jesus sends his disciples to all nations, in terms of the same idea of conquest." 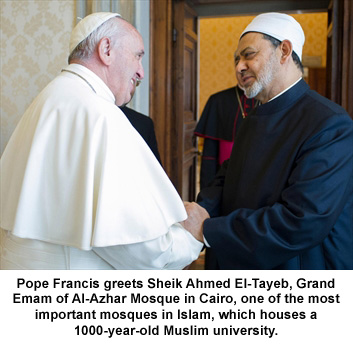 Here he reveals how Roman Catholicism`s gospel differs from the biblical one. Rather than a gracious wooing of the heart to the new birth, Jesuits and Dominicans have seduced kings and presidents to use government power to spread Catholicism. From the Inquisition to modern persecution in Chiapas, Mexico, Bible believers have felt the pain (and death) of Rome`s "conquests." Here the pope is right; both Islam and Roman Catholicism have a bloody history of conquest.

In the interview, Francis faults the West for invading Iraq and Libya and then trying to impose the "Western model of democracy." Apparently he preferred the oppressive regimes of Saddam Hussein and Gaddafi rather than America`s stated attempt to open the countries to more freedom which has always been feared by the Vatican. Unfortunately, radical Islam filled the vacuum because the Western Bible believers lacked the ability to move quickly with the true gospel. Freedom without righteousness only leads to more evil.

Now, with the "refugee crisis" in Europe, the pope is lobbying in the article for "integration" of the immigrants, but is he hoping that this will give him an opportunity to lead them to the Christ of the Bible, or his false Jesus-wafer "Christ?"

This only illustrates that the Roman Catholic gospel of conquest is more like the Muslim "gospel," than the true, biblical gospel of peace and joy. This Jesuit pope is convincing evangelicals to join him in spreading "the gospel." We must be aware that his gospel is not a biblical one. He is playing word games. For the Catholic to "receive Jesus," it is to have the wafer-god placed on his tongue.

Jesus spoke frequently about the "gospel of the kingdom." Rome`s counterfeit "kingdom" is bondage to the counterfeit "church." Instead of salvation being a personal commitment to Jesus through the Holy Spirit, it becomes a counterfeit grace dispensed by the Roman priesthood only available through the "church" that falsely claims to have been established by Christ.

The whole Roman Catholic institution is based on the misinterpretation of the conversation between Jesus and Peter about a rock in Matthew 16. By simply applying this to Peter as the first pope, this is the flimsy sand upon which the whole Vatican institution is built.

Once spiritual power was claimed by the popes, other scriptures were twisted to fit a host of pagan doctrines to round out the details of this monstrous counterfeit. A perversion of Jesus` sermon on Him being the living bread in John 6 becomes the biblical support for the wafer-god (Eucharist) by labeling it the "body, blood, soul and divinity of Jesus." Then, Jesus` Passover statements about bread and wine are used to seal the deal. Thus Catholics must go to the church to "receive Jesus" on their tongue, instead of in their hearts.

Christ`s simple statement from the cross for his mother to go home with John, is blown up to making her the mother of God, a Virgin Mary goddess, replacing Jesus as advocate for the whole world.