Reaching Lost Souls on Top of the World 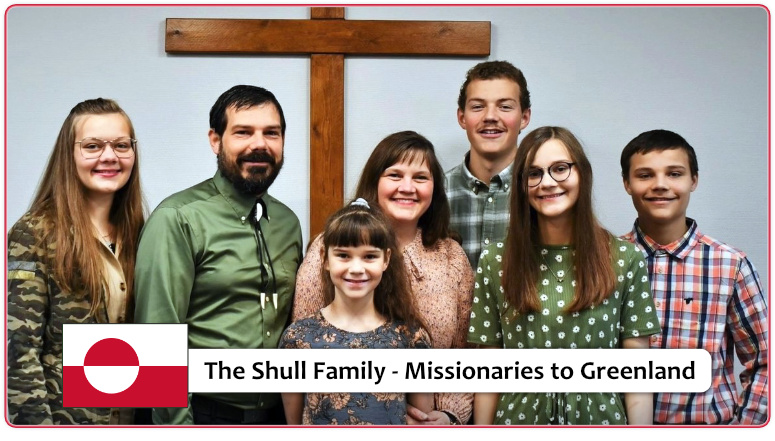 Thanks to your generous donations to the Chick Mission Fund, we have been able to provide the Shull family with over 50,000 Chick tracts since 2011 to be used in their ministry. Read below to find out what God is doing in Greenland.

When the Shull missionary family first got off the plane on the west coast of Greenland, in a small town called Ilulissat, a tour guide remarked, “This is the devil's town.” Chris Shull replied saying, “Well, this is the town for us!”

Fourteen years later, the Shulls have an established mission work on what he calls the “coolest place on earth.”

“We've been serving the Lord here since 2007. When we first arrived in Greenland, there was no one waiting for us at the airport. There were no believers, no veteran missionary, no one. We did not have long-term housing, nor could we speak the languages. We had three children under the age of 6 and my wife was expecting our 4th child in a month.

We knew no one, we were alone. It was just us and God! And when all you have is God, you find that He is all you need. He has proven over and over again that with God, all things are possible. (Matthew 19:26)”

It didn't take long for the Shulls to discover that not only was Greenland a cold place, but Greenlanders (The people of Greenland) were also very cold towards the gospel, as well.

The spiritual atmosphere has deep roots in shamanism (communicating with spirits) which has been overlayed with Danish Lutheranism. The people readily take their babies for the ritual of infant baptism, but it has little positive influence on the family because of rampant substance abuse.

Alcohol is a major problem in Greenland. Chris saw its effects during a short trip to a small island, called Uummannaq (). It has a population of 1400 souls and is located just 100 miles north of the church () as seen on the map below. 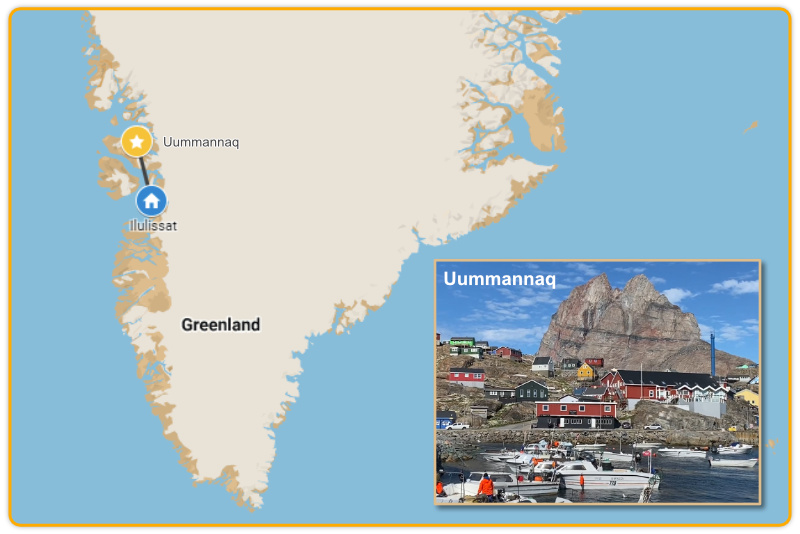 "Shamanism is big here. Everyone I know has ghost stories. Satan still has a tight grip on these souls." Shull said. Thankfully, during their short visit in Uummannaq, they were able to give out Chick tracts in the local Greenlandic language and also make some friends.

The Shulls now have the only Baptist Church in all the west coast of Greenland. It overlooks a fjord peppered with iceberg “calves” from the most active glacier in the world. After getting a grasp on the local language, Shull began saturation with gospel tracts.

He learned early on that the main prison for Northern Greenland was located in town and he began holding Bible classes for the prisoners. He says he had been praying for a way to reach young people and discovered that he had a “captive audience” just down the street at the prison.

Since prisoners are transported there from outside the area, he sees it as a way to expand the reach of the gospel because the inmates are eventually released to go back to their village. Of course, Chick gospel tracts are an integral part of this outreach. 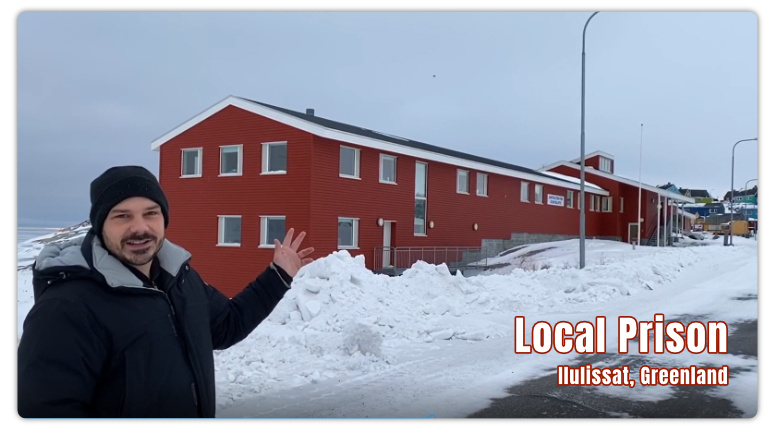 “This is our local prison, which houses inmates from all over Greenland. Once released, they return to their hometowns and villages. I regularly hold services in here, so we are literally reaching all of Greenland through this prison ministry.”

Although the town of Ilulissat has a population of less than 5000, it draws thousands of tourists to view the scenery, the busy glacier, and visit a local museum dedicated to the memory of native son and Arctic explorer Knud Rasmussen. As Shull’s congregation grows in street witnessing, he hopes to equip his members with an adequate supply of Chick tracts so they can send the tourists home with more than they came for.

Shull saw Ilulissat as a strategic "launching pad" for the church since it's a main city surrounded by several smaller towns. Greenland is also home to vast deposits of rare earth minerals which are going to be bringing more people into the area to mine them.

The people have a Bible in their language, but they have difficulty reading it. He said he has to start with the basics in his teachings. And when someone comes to church it is because they have spent many hours with them. “I probably know half the town,” Shull says.

His efforts have paid off with a good base congregation and thriving youth ministry, and he believes it is time to expand. Access to other communities up and down the shoreline is limited. Some are reachable by plane and helicopter, but boats are the most practical.

Currently, his boat ministry is on hold due to mechanical issues. He is hoping for a more suitable one by the time summer clears the ice for travel. His vision is to first get the gospel into the other communities by literature and then use his base for a follow up for other missionaries to come in.

The Shull’s story illustrates the value of good gospel literature in accelerating the planting of new missionary works in difficult fields. Extensive training of the congregation is not necessary because simply handing a tract to someone does not take a lot of expertise. And a few pennies worth of paper and ink can change someone's eternity.

Shull tells us about, "One lady we gave a tract to called me a year later and said she had a 'ticket' and could she come to church. The woman wanted to be baptized. When she came, it turned out to be a Chick gospel tract that she had gotten a year earlier."

He plans to remain in Ilulissat for many years to come and hopes more missionaries will join him in sharing the gospel in this beautiful city, despite all the tough problems.

"Please pray for the people of Greenland. It is a sad feeling to leave a village knowing it's still without a preacher. However, we are praying and expecting God to help us relaunch our boat ministry next summer, so we can spend more time in these remote villages."

VIDEO: Greenland - See What God Is Doing at the Top of the World


Missionary Chris Shull and his family have been serving the Lord in Greenland since 2007. Please watch the video above to see what the Lord is doing in this remote land and how Chick tracts are helping reach lost souls on top of the world.

Thanks to your generous donations, we have been able to provide the Shull family with over 50,000 Chick tracts since 2011 to be used in their ministry. The tracts are like little "preachers" that are sent throughout the country, proclaiming the love of God and salvation through Christ alone! Thanks and may God bless you!

How To Reach the Shulls in Greenland: 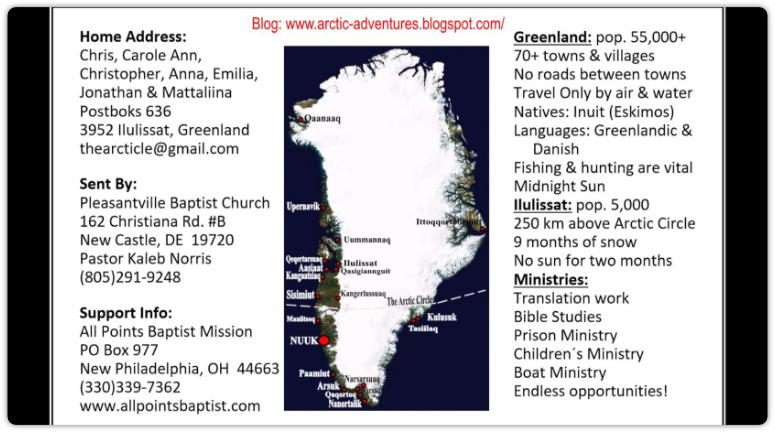