From Smokescreens ©1983 by Jack T. Chick. Reproduced by permission.

You may say, "Well, that was a long time ago. It's not like that anymore." But has the Vatican really changed? Let's look at her actions during World War II. Many of you have not read our Crusaders comic book, THE GODFATHERS or the paperback book THE SECRET HISTORY OF THE JESUITS , and, therefore, you don't really know what happened behind the scenes during World War II. So let me give you a brief picture of the conditions. 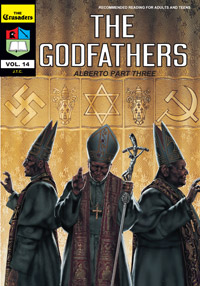 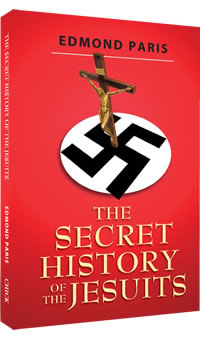 The Jesuits had secretly prepared World War II, and Hitler's war machine was built and financed by the Vatican to conquer the world for Roman Catholicism, Hitler, Mussolini, and Franco were to be the defenders of the faith. They were set up to win and conquer the world, and set up a millennium for the pope. Behind the scenes, the Jesuits controlled the Gestapo. All this is fully documented in THE SECRET HISTORY OF THE JESUITS, published by Chick Publications.

Read what the press of the Spanish dictator, Franco, published following Hitler's death. It said, "Adolf Hitler, son of the Catholic Church, died while defending Christianity." It goes on to say, "Over his mortal remains stands his victorious moral figure. With the palm of the martyr, God gives Hitler the laurels of Victory."

Hitler himself stated, "I learned much from the Order of the Jesuits. Until now, there has never been anything more grandiose, on the earth, than the hierarchical organization of the Catholic church. I transferred much of this organization into my own party."

Walter Schellenberg, former chief of Nazi counter-espionage made this statement: "The S.S. organization had been constituted by Himmler according to the principles of the Jesuit Order. Their regulations and the Spiritual Exercises prescribed by Ignatius of Loyola were the model Himmler tried to copy exactly. Himmler's title as supreme chief of the S.S. was to be the equivalent of the Jesuits' 'General' and the whole structure was a close imitation of the Catholic Church's hierarchical order."

"I am personally convinced of the great power and deep significance of Christianity, and I won't allow any other religion to be promoted. That is why I have turned away from Ludendorff and that is why I reject that book by Rosenberg. It was written by a Protestant. It is not a Party book. It was not written by him as a Party man. The Protestants can be left to argue with him ... As a Catholic I never feel comfortable in the Evangelical Church or its structures. That is why I will have great difficulty if I try to regulate affairs of the Protestant churches. The evangelical people or the Protestants will in any case reject me. But you can be sure: I will protect the rights and freedoms of the churches and not let them be touched, so that you need have no fears about the future of the Church."

Hitler was also ready to discuss with the Bishop his views on the Jewish question: "As for the Jews, I am just carrying on with the same policy which the Catholic church has adopted for fifteen hundred years, when it has regarded the Jews as dangerous and pushed them into ghettos etc., because it knew what the Jews were like. I don't put race above religion, but I do see the danger in the representatives of this race for Church and State, and perhaps I am doing Christianity a great service."

The three big defenders of the Roman Catholic faith were Hitler, Mussolini, and Franco. All three had concordats with the Vatican. When the Nazi war machine swept through the Balkans on the way to attack Russia, Yugoslavia had become a Nazi occupied country.

The pope despised the Russian Orthodox members. They were called Serbians and they were marked for death in Yugoslavia. They were given one choice: to convert to Catholicism, or die.

The Catholic priests changed their robes for the uniforms of the dreaded Ustachi killer squads, and led the most barbaric, brutal raids upon those people and practiced satanic torture never before known in this century. We are not talking 800 years ago. We are talking 1940. I was in high school then.