Pope Francis: The White Knight to Save the World?

Last week the U.S. saw a magnificent spectacle. Millions watched in person —and more millions viewed by TV— as a white-robed figure interrupted the lives and snarled the traffic of the nation`s capital and largest city.

Seemingly loved by all, this down-to-earth pope spoke of peace, love, justice, unity and "the common good." He is seen by a couple billion as the embodiment of the Church founded by Jesus Christ. He graciously kissed babies and caressed the hands of weeping nuns.

Could anything be wrong with this picture?

Surely not. Who would dare rain on this parade? Could two billion people be sincerely wrong? I`m afraid they may be. The Creator, Himself, voted against this extravaganza of religiosity in His Book written centuries ago.

Other than a few oblique references to Bible passages in his speech to his bishops, no significant reference to Scripture or the Bible can be found in any of the pope`s main speeches. The pope`s central appeal was to promote the "common good." Perhaps this diluted wording was necessary to be "politically correct." But how can we commoners know what is good without a reliable source of truth?

If we use the rule: actions speak louder than words, things get really interesting. Was it, for instance, for the "common good" that this man, who comes as "Vicar of Christ" (same root word as vice president) performed a pagan sacrifice of a wafer-turned-god (Eucharist) at a shrine to an ancient goddess figure he calls the Virgin Mary? As a bonus, in the process he declares that a dead man, Junipero Serra, is now able to mediate with God for you if you need a favor!

If true, all this might be well and good, but none of it lines up with one Book that the pope claims to follow —the Bible. The real source of these "doctrines," is the mysterious Magisterium, which includes, among other things, the common teaching of all the popes, church fathers, synods, councils, edicts, and encyclicals that binds Roman Catholics to the pope. Following the Magisterium`s brand of "common good" for the last fifteen hundred years has left a lot of people dead, before and after the Inquisition. 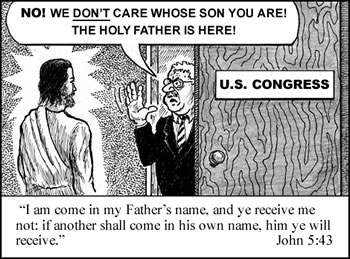 If we look closely at this pope`s short visit, we see many other ways that he acted out unbiblical Magisterium teachings. For example, most of the "church" leaders flocking around the pope were sworn to mandatory celibacy, never allowing the bishops, priests and nuns to participate in God`s plan for the wholesome paring of the two genders. In contrast, the Apostle Paul instructed Timothy and Titus to make marriage a primary condition for church leadership.

Mandatory celibacy, alone, creates at least two evils that were illustrated in the pope`s actions: In all the splendor of his visit, he gave only token attention to the lonely victims violated by homosexual priests who were passed off as mere pedophiles. Yet, most of their victims were teenage boys, the choicest choice of the "gay" predator. Denied normal marriage, few normal men opt for the priesthood, leaving a vacuum often filled by the sexually "disordered."

Another evil displayed was the plight of the nuns who bowed in tears to extend their hands for the pope`s loving touch. Seduced while young to deny their God-given maternal drive, they "marry" the church and are forever bound to it without any hope of golden years spent with adoring grandchildren.

Another huge component of this pope`s agenda was political. Having discovered the power of his bully pulpit, he has chosen the climate change crusade as the best way to unify the world. His appeal to the Congress and the UN assembly focused on preserving the planet —"our common home." He faulted the richer nations for their high living on the necks of the struggling poor. His solution: follow Fidel Castro, with whom he had a reported "relaxed, fraternal" visit prior to flying to the U.S. But he refused to speak to the "common" people in Cuba who wanted to complain to him about life under Castro. They were left standing in the street.

How sad that so many have been enraptured by this man in white (notice most non-church dignitaries around him wore black), who uses "great swelling (Christian) words." Because of our multiplicity of confusing bibles, we no longer see through this anti (false) Christ who preaches an unbiblical gospel of works salvation, and markets "another Christ" not found in scripture. Every bit of this pagan charade is only designed to lock the precious Roman Catholic to "mother church" for life, lest they dare look elsewhere for eternal hope.

Even the "evangelicals" have swallowed the poison wine of this prostitute church. A survey was conducted by Lifeway Research, published during the pope`s visit in Christianity Today under the title,"From Anti-Christ to Brother in Christ." It found that over 90 percent of 1,000 "Protestant" senior pastors polled believed that a Roman Catholic, who believes in this false gospel, can be born again. Sixty three percent said they believed this pope was a genuine Christian and a brother in Christ. Another 16 percent were not sure. The sample included both mainline and evangelical pastors, but 58 percent of the evangelicals believed the pope was saved.

It just proves the adage that if you tell lies long enough everyone will believe them. The popes know that time is on their side and they are willing to wait. The Jesuitical plan, introduced at the 1960s Vatican II Council to begin wooing the Protestants rather than killing them, is working wonderfully well.

The devil who inspires this man wants all to join hands around this "common good." But we can`t know "good" until we know the Truth, Himself. Jesus predicted the rise of false christs. Paul warned against "another gospel." Unless we stand on the preserved words of God, we will fall for anything Satan cooks up.

Soulwinners, while we have the freedom to do it, let`s sound the warning about this prostitute "church" led by this winsome usurper. Chick Publications has enough tools to do the job. Anyone who doubts that this pope is an imposter should visit our Catholic Information Center.

Other Articles from November/December 2015: