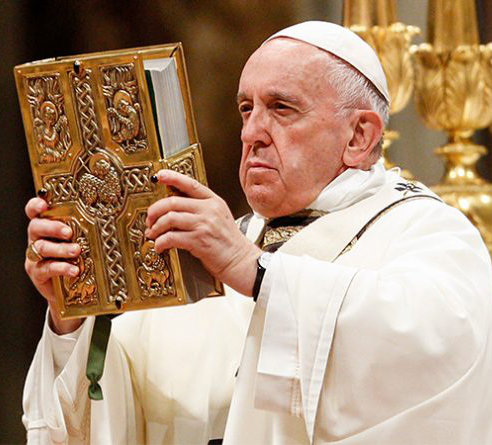 Of the hundreds of pictures of Pope Francis on Google, less than a dozen show him with a Bible. The ones that do are like the one above, where it appears to only be an idol.

Pope Francis boldly exposed the Vatican’s claim to superiority over the Bible by proposing a change in the “Lord’s Prayer.” Apparently bothered by what he thought was faulty logic in the phrase, “And lead us not into temptation,” he is proposing changing it to: “Do not let us fall into temptation.”

According to the pope’s reasoning, God is not in the business of tempting man; that is the devil’s domain. However, author and linguist David W. Daniels points out that the Greek eisphero does mean “lead into” in this context. The pope’s wording is an interpretation, not a true translation.

In addition, says Daniels, Matthew 4:1 tells us, “Then was Jesus led up of the Spirit into the wilderness to be tempted of the devil.” It is quite clear that Jesus did not just “fall into” this temptation. He was led by God —for a specific purpose.

The fact is that people often do not listen to God. Sometimes He chooses to get His message through to them by bringing them into temptation.

A tragic example is Balaam the son of Beor. When he kept seeking God’s approval to go and curse Israel, the Lord finally told him to go, but set up for an angel to oppose him, and let his own donkey save his life. Sadly, Balaam did not listen even after God prophesied through him, and he was soon killed along with the enemy, because he loved money more than obeying God.

However, the pope could not make this arrogant move unless he believed that his “church” were in charge of the Bible. Many protestants today believe that without the Roman Catholic Church, we would not have a Bible. Since the Vatican II Ecumenical Council, Catholic propaganda has successfully spread the lie that “the Catholic Church gave us the Bible.”

Daniels answers the question: “Did the Catholic Church Give Us the Bible?” in a book by that name. He shows that the popes did indeed give the world several bibles, but all are based on counterfeit manuscripts and slanted to promote pagan Catholic teachings.

Roman Catholic doctrine claims three sources of authority: the pope speaking ex cathedra, the teaching authority called the Magisterium, and then the Bible. However, they discourage people from interpreting the Bible for themselves, claiming that they can only understand it through the interpretation of the “Church.”

Daniels’ book details two streams of manuscripts supporting two very different types of current bibles. One stream includes thousands of documents confirming the accuracy of one English Bible, the KJV. The other stream has only a few dozen documents of dubious origin and content with questionable histories. Yet Vatican agents were able to influence the Bible translation process of the last two centuries. They succeeded in replacing the reliable manuscripts with the counterfeit ones now used by the Bible Societies.

Thus, it is technically true that the Catholic Church gave us bibles, but they are flawed, with missing verses and changed wordings that reflect Roman Catholic teachings. For example, deleting Acts 8:37 removes the one scripture that most powerfully refutes infant baptism.

Since the Vatican has convinced the world that they gave us the Bible in the first place, their next logical step is to get us to rely on the “Church” for its interpretation. This is why the pope feels free to change the Bible at will.

At the same time, as part of the propaganda used to sell the flawed bibles, they have mounted a powerful negative PR campaign against the one Bible with a solid manuscript history and 400-year reputation for world-wide missionary effort and numerous world-changing revivals.

Other Articles from September/October 2019: