Pope Casts His Vote for Globalism 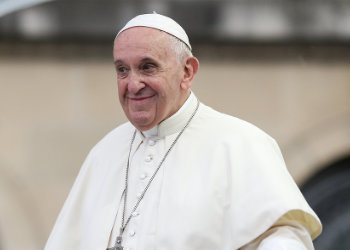 Throughout history the popes have maneuvered to come out on top in any world conflict. Today's struggle between freedom and globalism is no different. Having made much progress toward a one-world Bible, Pope Francis now looks forward to a one-world religion and one-world government.

One of the principles stressed by ex-Jesuit Alberto Rivera in the Crusader series was that the Vatican always tries to come out on the side with the winner in any global, or even regional, conflict. After losing domination of the Western World during the dark ages to the powers of the Protestant Reformation, Rome played both sides, with the rise of nationalism in Europe and Protestantism in America.

Rivera described how the popes provided support for Hitler when it looked like he might prevail. Jesuits also seemed to be involved in the creation of communism.

Hedging their bets in the rise of Protestantism in the U.S., they held an “Ecumenical Council” in the 1960s and successfully re-labeled the Roman Catholic cult a truly Christian “denomination.” Now, with the rapid rise of the ideology of secular socialism, Pope Francis is hedging again to champion the drive toward globalism.

In May of this year, the Pontifical Academy of Social Sciences issued a report of a plenary session addressing the issue of nations, states and globalization. In the context of a lot of philosophizing, several statements reveal the pope’s position on the global social, economic and political trends.

“Global politics is at a crossroads,” the report claims. It goes on to observe that the institutions, such as the United Nations, set up after World War II are wearing out. “…[W]e can no longer postpone the search for a new institutional setup to govern the growing interdependences and interconnections within and between societies.” In other words, we need to start looking for a one-world, or world-wide, government.

The scenario is clear. They are going to propose that this will bring “peace and safety” (1 Thess. 5:3) and bring together the leaders of the world as a unified group (Rev. 17:12). But because of nationalism (every nation having its own system of governance), someone will have to arise to make them all “play nice.” Could that world leader be the pope, or the Jesuit General? The pope, himself a Jesuit, is proposing that all people should get together, so it seems he is jockeying for the position of global leader. We get clues from Revelation 18, when we see the new “Babylon” filled with the very same items at use in Roman Catholicism and its massive system of idolatry.

Many of our young people today are duped into believing in this impossible dream of a planet of harmony and “inclusive prosperity.” They have not been taught that there is a Devil and the heart of man must be redeemed from the power of sin.

Pride and lust for power has destroyed every such unbiblical dream. The records of Hitler, Stalin, Mao, and now Castro and Maduro all testify to this.

Even “utopias” such as Sweden and Singapore fail to solve the emptiness of the human spirit without submission to our Creator. God promised the peace and prosperity that man longs for only to those who obey His law of love.

And that law requires the recognition of and suppression of evil. But that must start with personal commitment to obedience, —“self-government,” the founding fathers called it. Freedom does not include permission to disobey God’s commands.

Chick Publications is dedicated to what really matters: the salvation of the human heart. Without regeneration by the Holy Spirit, the heart is “deceitful above all things, and desperately wicked: who can know it?” (Jer. 17:9) No amount of political gymnastics can fix it. And no society can succeed without fixing it.

The engaging stories in Chick tracts stress the goodness of God that leads us to repentance (Rom. 2:4). Yet they also warn of the consequences of a life of rebellion.