People all over the world are much like us. They love their families, are pressured to provide for them in a world under a curse, and are seeking meaning in life. The same Chick tracts that grab attention for Jesus here in the U.S. do the same elsewhere. Your gifts to the Mission Fund last year made it possible to provide more than three million Chick tracts to over 75 missionaries and their teams.


Missionary Noel Shrivnauth (BIMI) serves in Guyana, located right next to the tragedy of Venezuela. Since beginning in 1994, he has established a strong local church in Eccles, just outside Georgetown, and trained many national pastors who have established churches throughout the country. He got a recent phone call to the church from a young man asking for someone to talk to. Desperate over some addictive habits and sins he could not control, he needed help. When Noel asked "How did you hear about us?", the young man described visiting his sister's house where he spotted Charlie's Ants on the table. He picked it up, got convicted, and called Noel. He came to church, then a church leader visited his home, and soon he got saved and baptized. He now is regular in church and serving the Lord. It all started with a cartoon tract!

Another church member drives a taxi, where he keeps Chick tracts you provided in the back seat pouch of his car. He tells customers to look through them and pick the one they like. One passenger (Amanda) chose No Fear. Riding with him another day, she admitted that she got this tract right at a time that she wanted to take her life. That tract convinced her not to commit suicide.

Through your giving, we send a shipment of life-giving tracts to Noel every quarter, to keep his mission supplied. Noel reports a huge increase in the number of people being saved. Thank you! 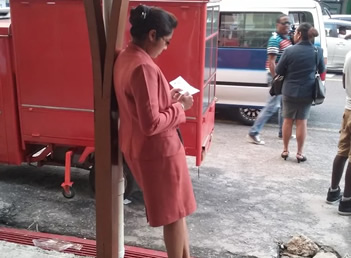 
Missionary Eric Fair received the 20,000 Chick tracts you provided him. Here he describes what it is like to use them: "We have been passing the tracts out like crazy over here! Just went out today because we go out every Friday to street preach and pass out tracts in 2 places here. The first location we went through a whole box of the This Was Your Life tracts in Pidgin.... that's 1,000 tracts in the first 30 minutes. By the time we hit the second location we had to use some of the tracts we had left but ran out very quick! Thank you all so very, very much for sending them to us!!! I had a guy come to me a couple weeks ago and ask for 2 boxes because he just got saved recently and gives hundreds of them out every day."

Eric describes how they often don't care where they are —they just sit down and begin to read the gospel tracts, like the young man in the photo below: 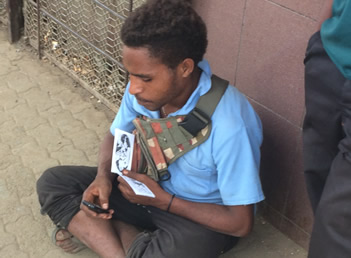 
Missionary Gerald Sutek describes his recent experience with the Chick tracts you provided: "On the last day of November (Friday night) we had 36 of our folk out for a hot, exciting, nighttime Christmas street meeting in one of the sections of our city. Our group passed nearly 2,500 tracts (all that we brought), held scripture signs and at least 8 preached to the countless multitudes shopping. We had zero resistance from the guards standing literally beside us. We stood right at the exit doors and passed tracts without interruption as fast as we could open the Chick tract cellophane wrappers. We had 92 in service the Sunday following with good attendance at the altar and many were dealt with concerning their souls."

Since the last issue of Battle Cry, missionary shipments have been sent upon request to Kenya, Belgium, Tanzania, Philippines, Ethiopia, Japan, Mexico, Argentina and more. More and more missionaries are hearing about the Chick Mission Fund, and asking for tracts. Sometimes, we have to tell them that we don't have the funds, but will wait until the Lord sends more. They understand, but they gave up their homes and families to go. Will you give them the tools? 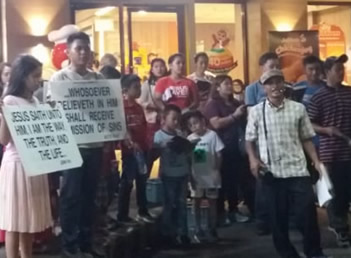 Hundred of thousands of tracts are now being printed for additional project, with more requests coming in from missionaries every week!

Other Articles from January/February 2019: