One of the fascinating parts of working with missionaries as part of the Mission Fund is to see the many ways that they find to continue the work, even with huge roadblocks. We are all too aware of how difficult things become when there is a COVID lockdown. This has happened worldwide, but missionaries have found ways to continue the work. People are still dying and going to hell, so we cannot let up!

Junior Haley, missionary to Belgium, was determined to keep ministering, so he got around his 10-person limit in each service by having many services each Sunday. It was tough on him, but everyone got to hear the Gospel. He writes: “We have also been able to get back into our street ministries and evangelism, with little trouble. All of this was illegal for a time; but now we can preach on the streets, give gospel tracts, and go door knocking; and so far the only issue is being required to preach in a mask. Thankfully while we had to change some of our methods, we never had to stop giving the Gospel.”

Missionary Ray Hoover, BBFI missionary to Ethiopia, receives regular shipments of tracts in Amharic and Oromo languages. He shares this photo with us, writing, “This photo ...was taken in early August in one of our countryside churches in Sebeta. These men may look like a bunch of bandits with their masks but they are blood-bought evangelists who are going out into the highways and hedges to reach the lost for Christ. I am so proud of each of them.” (Note that they have their Chick tracts ...thanks to you!)

Missionary Todd Eklund is coordinating a huge outreach here, working with a group of five churches in Mexico City. You just provided them 200,000 Chick tracts for this work in the most populous city in North America. Getting two tons of tracts through customs was challenging, but God is faithful and the work is now beginning. Pray for the Lord to give fruit.

With the help of Missionary Lacy Wheeler, 10,000 Spanish tracts have been passed out in the historic mining town of Guanajuato, Mexico. He is also helping us get another 10,000 tracts to Carlos Donate in Guatemala. This missionary was saved reading “This Was Your Life,” and now will use that same tract (in Spanish) in Guatemala City.

Two missionaries who are very active stressing street evangelism among local churches in the Philippines are Bruce Hunsaker in the southern part of Mindanao, and Mike Carey in the north. They have mobilized many churches to put teams on the streets in outreaches using the Chick tracts you provide. Just since the last newsletter, you have provided over 270,000 Chick tracts for these workers. Some of these shipments have gone to churches in dangerous heavily Muslim areas. Hunsaker is especially careful to give tracts to the local police (see photo), and gains their respect and complete cooperation. Everyone loves cartoon tracts, and they quickly open doors to discuss the Bread of Life.

Chang Soo Nam and his wife are missionaries sent from Korea to the Philippines. They package the 10,000 Chick tracts you provided with snacks, and take them to the streets. People everywhere stop what they are doing to read the cartoons, and hear God’s message of love. 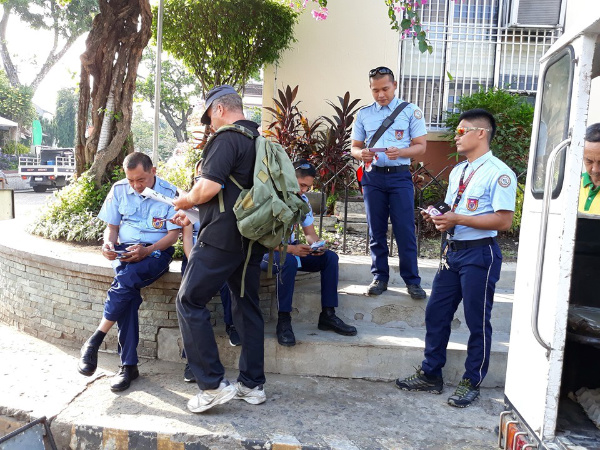 In addition to their ministry taking the gospel to those in hospitals, Hospital Ministry of India (HMI) also conducts services in jails in parts of the country. The last printing of 100,000 Chick tracts you provided to them were used with inmates like these at a service at the Jail in Ponnani (Southern India).

A large shipment of tracts for missionary A.L. (name withheld) has safely arrived in Israel. The Jewish religious leaders are very vocal in their dislike for his gospel message, but that is the same situation Jesus faced. This missionary regularly uses dual-language Chick tracts to reach the many Jewish immigrants who come to Israel from other parts of the world. They learn of Jesus while they are learning Hebrew!

Josh and Mary McBryar in Asia, use creative methods to get the Gospel into areas of Asia that are very difficult to penetrate. You just provided them thousands of Chick tracts in Korean, Russian and Mongolian.

We get calls from supporters wanting to know how we decide where to send Chick missions tracts. We want to make everyone aware, we do NOT just ship tracts to random missionaries. Instead, we respond to those who call or write asking for the tracts. They very much want and need them for their outreaches. That way, nothing is ever wasted. These missionaries are very grateful to all of you for making this possible.

Other Articles from November/December 2020: