Even Popes Have Trouble Becoming Saints 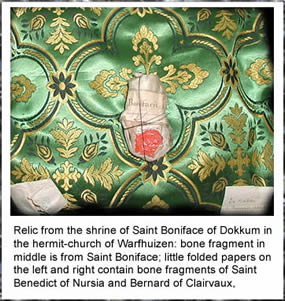 Those who claim that Roman Catholicism has changed need to carefully examine the circus surrounding the late Pope John Paul II`s sprint to sainthood. Even during his funeral, the cry was heard: "Santo Subito!" —or "Sainthood Immediately!"

Historically, the process of declaring someone a full saint could take decades. Yet, so popular was this charismatic pope, that millions are pushing to get him quickly installed in Rome`s pantheon of fake mediators.

So why is it so hard to become a saint? Paul refers frequently in his letters to "the saints" but he is almost always speaking of living persons. The Bible clearly indicates all born-again believers to be saints. Again, true to form, Catholicism has taken another pagan lie and shoehorned it into their "Christian" doctrine. Satan is desperate to discredit Jesus and get us to focus our devotion somewhere else. No wonder God calls the Vatican the Great Whore. From Virgin Mary worship, to adoring a wafer god, to praying to saints, to purgatory, all are designed to distract from the intimate relationship that Jesus desires of His followers.

To support Catholic teaching that we can contact the dead, proponents of sainthood for John Paul II are scouring the planet for evidence that he has responded to prayer to him. A minimum of two miracles are required as proof of his "intercession," unless the person was martyred, earning immediate sainthood. Already, one lady has testified that she was cured of Parkinson`s disease through prayer to him. This was enough to earn him "beatification," the last stage in sainthood progression.

Another aspect to sainthood is relic worship. Already vials of John Paul`s blood are being passed around as relics. Just before he died, a hospital drew the blood in case he needed a transfusion. It was never used and some was passed on to a church official. One vial is destined for a new altar in a church in the pope`s home town of Krakow, Poland. Another was presented at his beatification, May 1, as his "official" relic.

The faithful use the relic as a contact point with the saint to get his help for divine favors. One example is a Polish race car driver who wears a medallion containing a thread from John Paul II`s robe and a drop of his blood. These were given to him by his archbishop after an injury in a racing accident. Catholics point to the common practice of asking others to help us pray for something and claim that asking the help of departed saints is no different.

But the Bible provides no support for the dead being able to help in this way. The whole idea is contrary to the scripture: "For there is one God and one mediator between God and men, the man Christ Jesus:" 1 Tim 2:5. As mentioned before, this is a distraction that directs the person`s focus away from building a relationship directly with the Savior. Relics do the same thing.

Nowhere in Scripture do we find support for "venerating" a saint`s blood. Alexander Hislop, in his book, The Two Babylons, described how, "...in the realms of Heathendom the same worship [of relics] had flourished for ages before Christian saints or martyrs had appeared in the world." This is just one of many ways this prostitute church pollutes the pure word of God with pagan idolatry.

Rick Jones, in his book, Understanding Roman Catholicism, asks the obvious question: "Why would the Catholic church rather have members pray to dead men than to the living, all-powerful, prayer-answering God?"

But isn`t that what prostitutes do: substitute the false for the real?

Other Articles from May/June 2011: