Terrorism Must Be Answered With Revival

Last month the world woke up to a new world disorder. What boiled over in Paris is simply a pot that has been simmering for a long time. What Israel has endured for years has now come to the rest of the world, even San Bernardino, California. 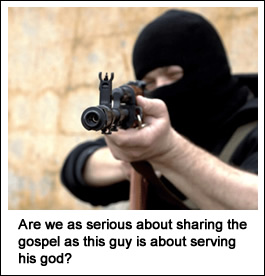 We have watched in worry as airliners exploded in the sky or simply disappeared. Varieties of car and suicide bombers have killed hundreds, as gunmen sprayed bullets into crowds, mostly in the "third world," only occasionally in the West. Yet, "tolerance" remained the watchword. But now, with the fun and games literally interrupted by this seething terror, even top Western leaders are scratching their heads in bewilderment.

Some wiser talking heads are suggesting that a military response might be inadequate against the Muslim`s so-called "ideology." But all wars have been conflicts over ideologies. Some are just a little more obvious.

Hitler had an idea(ology) that Aryans were better than Jews and other "sub-human" beings. But the West had a counter "idea" that freedom was better —and millions died to prove it.

But Europe was like Rome when it fell to the barbarians. It had become soft with selfishness and amusements, preferring fun and games rather than vigilance to protect their freedom.

What some have called the "clash of civilizations" is at the heart of the now world-wide conflict. The big question: will freedom win again, or has it lost its heart? Hitler can again be our teacher. When he lied, and then invaded, most of Europe had already decided for humanism's science and reason, against biblical righteousness.

This proved no match for Hitler`s high tech war machine piloted by converts to his Nazi "ideology." Most of Europe fell in a matter of months. Only the biblical Christian heritage of Britain and America provided the heart and will to spill enough blood to stop him.

Today, a more fanatical "ideology" has raised a bloody butcher knife against a decadent West. Like Hitler, it has commandeered modern high tech weaponry in a brazen pledge to force every "infidel" to convert, die or grovel in slavery. Part of Islam`s plan is infiltration through the broken gates of "tolerance" into the haven of our "multiculturalism." Once they gain enough power, the blood bath begins.

So, who will save us? Modern humanism has now sapped the life out of America, the last global power able to stop such a global evil. Twice in the last century America saved Europe from the "barbarians." No one is left to save America. There is only one solution: revival. King Solomon observed in Proverbs 14:34 that "Righteousness exalteth a nation: but sin is a reproach to any people." Many decades ago Lady Liberty began losing her hold on righteousness. Soon Supreme Court decisions began legalizing sin.

Only time will tell if the Western heart can be restored. But Bible believers are the only hope. No doubt these are the "perilous times" of 2 Timothy 3. Without another Great Awakening, only Christ`s return wielding His "rod of iron" (Rev. 19:15) will be able to set things right again.

In the meantime, we soul winners are to "occupy" until He comes, whatever happens. Occupy does not mean sitting around waiting on our "blessed assurance." The question still hangs in the air: Will we be found faithful to the Great Commission?

No-nonsense gospel tracts have always played a big part in sparking the revivals throughout history. Chick Publications ships several million tracts a year in over 100 languages. Virtually anything you need is available for soul winners concerned enough to carry the gospel to a world increasingly desperate for answers. Jesus is the Answer. We Christians just need to get that message into the hands of unbelievers caught in today`s confusion.

For Muslims, we must show them a God that actually loves them. Their Allah unpredictably "misleads whom he wants," without compassion. Several Chick tracts are designed either to speak God`s love to the Muslim`s heart, or expose Islam`s teachings. Chick also publishes several paperback books to better equip soul winners to reach Muslims. It is even possible that you or I could put the right paper missionary into the hands of a would-be suicide bomber that would redirect his life from destruction to the real paradise of God.

Other Articles from January/February 2016: