"Africa is wide open," says missionary Bill Eubanks. "They will take all the tracts you can give them and they respond and get saved." Eubanks and his wife, Janet, have just returned from a short tour of South Africa. In about a month, they were able to distribute 120,000 tracts and showed the video, The Light of the Word, many times to audiences of 40 to 1,200 in attendance. The film was shown in churches, schools and prisons; and tracts were left with the students, inmates and congregations. Between meetings, the Eubanks would find a popular crossroads, set up a portable DVD projector and a bed sheet for a screen.

In a short time, several hundred people would gather. After showing the film, an invitation would be given with many accepting the Lord. Tracts were then given to everyone to take the gospel with them. On the back of the tracts was the address of a local church they could attend.

This trip focused on the nation of South Africa where a base has been established for an outreach to Zimbabwe sometime in March of next year. They hope to have 200,000 tracts for that trip. "Unlike America, you never get a turn-down when you hand someone a tract on the street," says Eubanks. "100,000 tracts will reach a million people because at least 10 people will read each one. It`s all about planting the seed so God can give the increase."

Here are some pictures of the South Africa trip. If you would like to be a part of the Eubanks` outreach to Zimbabwe, you may make a non-tax-deductable donation to the Chick Mission Fund. If you donate through your church, you may get a tax-deductable receipt. Designate it "Eubanks Outreach." 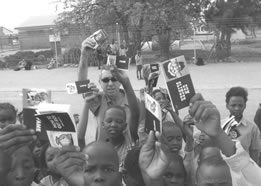 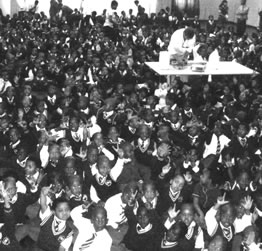 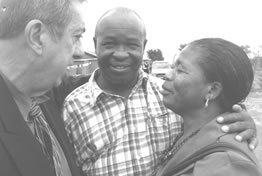 Other Articles from January/February 2007: