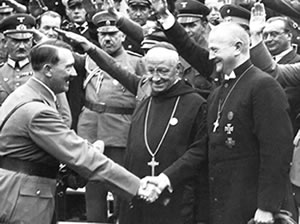 A recent Vatican synod of bishops, called to discuss the situation in the Middle East, has stirred Israel`s fears. Although recent popes have attempted to reach out to the Jews, they are still wary. Centuries of persecution by dozens of popes are not easily forgotten. One writer in the Israel National News of October 24 focused on a statement in the final document of the synod: "Recourse to theological and biblical positions which use the Word of God to wrongly justify injustices is not acceptable."

This was in the context of admonishing Israel to commit "to a sincere, just and permanent peace." Elsewhere in the document the synod expresses "hope that the two-State-solution might become a reality and not a dream only," and, that the UN would take "the necessary legal steps to put an end to the occupation of the different Arab territories." The Israel National News reporter comments: "The Catholic church in recent years has been trying to overcome centuries of anti-Semitism and proof that it exploited the Holocaust to try to convert Jews who were saved." He is referring to recent revelations that, while the Vatican claimed to have intervened and saved many Jews from Hitler`s gas chambers, in reality, it did so to convert them to Catholicism. Babies, in particular, who were saved, were baptized and placed with Roman Catholic families and never told of their Jewish heritage.

The tenor of the final document is clearly in favor of the Palestinians as victims of "occupation" and denied "justice." Little mention is made of the relentless Palestinian attacks on Israel and their constant demand that the only "just" solution that they will accept is the elimination of Israel.

At the conclusion of the synod, one archbishop, Cyril Salim Bustros, restated the pope`s long held belief that God`s promise of an eternal homeland for the Jews, was cancelled when Jewish leaders rejected Jesus as the Messiah: "For Christians, one can no longer talk of the land promised to the Jewish people... There is no longer a favored people, a chosen people; all men and women of every country have become the chosen people."

This belief is the spark that has ignited centuries of persecution of the Jews. "Christ killers" was the cry of the crusaders who slaughtered thousands of Jews on their way to liberate Jerusalem from the Muslim infidels. Hitler`s "final solution" to the "Jewish problem" was partly inspired by this attitude.

The sordid history of the Vatican`s persecution of the Jews has been all but eliminated from modern history books. But modern Israel remembers and is not about to let the recent sweet talk from the Vatican fool them. They know that millions of Jews have died at the hands of popes and tyrants motivated by Satan`s determination to eliminate them.

They also know that the pope is an additional enemy with eyes fixed on Jerusalem. Not only is it holy to Judaism and Islam, the Vatican is also maneuvering behind the scenes to gain control of it. Rome`s expressed solution to the problem of Jerusalem is to internationalize it under UN jurisdiction. The popes` cozy position with the UN would, presumably, give them a part in ruling the city. Many details of this history of the Vatican against the Jews have been preserved in the accounts given by ex-Jesuit Alberto Rivera. The Alberto series of Crusader Comics by Chick Publications pulls together some of the facts behind Roman Catholicism`s historic attempts to eliminate the Jews and substitute itself as the "people of God."

The Jesuits have been the Vatican`s "special forces" over the centuries in the attempt to solve the "Jewish problem." Edmund Paris`s book, The Secret History of the Jesuits, also contains a detailed account of their maneuverings over the years.

Other Articles from January/February 2011: