Four Words That Open the Doorway to Satanism

When I was a teenager, I was sucked into the occult by a simple phrase that unlocked the doorway to the occult. Oh, and I recently found it —in a commonly used Bible!

Want to know what it was? And what it had to do with this picture of a statue with horns? 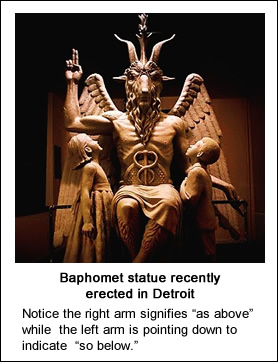 In high school, a friend of my dad`s gave me a book by Hermes Trismegistus. In it I learned a single phrase that is the basis of hermetic science (magic or occultism). It unlocked the doorway to the occult: "As above, so below."

First, like the hands on the Baphomet image, it means that things on earth (below) come from or are affected by things above. That`s astrology, among other things.
Second, you are taught that it has to do with gaining power, "realizing your true potential." At that point, you might get spirit guides to help. But how do you know if they`re good or evil? It`s easy. If some being says it will teach you secrets to give you power —it`s evil. God doesn`t do things that way.

But I didn`t know that. So, I got spirit guides. But seeking power led to new religious beliefs.

Opposites, like black and white, above and below, masculine and feminine, good and bad, took on new meanings. They say, "You cannot have one without the other." That means you cannot have evil without good, or good without evil.

Then, since good and evil are simply opposites, that means ONE IS NOT BETTER THAN ANOTHER. They are all the same. "There IS no bad. There is just what works for you and what doesn`t work for you." Sound familiar?

Baphomet actually represents what they call the path of enlightenment. And if you are one of "the elect," then you will be let in on more secrets. At the highest levels, they tell you that Lucifer, who offered knowledge in Eden, was actually the good guy. That would make God Himself the bad guy. Such evil!

See, the Baphomet is not a real creature. It is really a bunch of occultic symbols showing the path to enlightenment, overcoming the light-bearer, Lucifer, to get power: to change metal into gold, or man into a god.

Today, Satanists and popular culture show Baphomet all over the place. Google "Baphomet clothing" and you get over 200,000 hits.

How do people on that path let others know they`re on that path? They use code words, like: "As above, so below."

Oh, and that other Bible I told you about? It`s Eugene Peterson`s "The Message." Look at his "Lord`s Prayer" in Matthew 6. It changes "Hallowed be thy name" to "Reveal who you are." Why? Is God hiding?

Then it changes "Thy will be done, in earth as it is in heaven," to "Do what`s best, AS ABOVE, SO BELOW." There`s those code words. Why did he use them, since they`re not in the text? What kind of "message" is he sending? —And to whom?

Black and white are NOT two sides of the same force. God and whatever God wants, is good. Disobeying God is evil, plain and simple.

And Baphomet is a symbol of rebellion against God, no matter how you look at it. I want to obey God. So I`m sticking with what God said, in my King James Bible.

You can find out more about Baphomet in chapter 8 of my book, Should a Christian Be a Mason?.

This article excerpted from a vlog "Who or What is Baphomet?" by David W. Daniels:

Other Articles from September/October 2015: