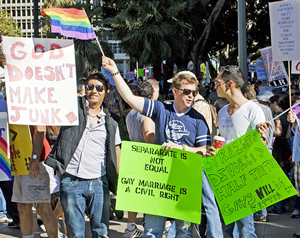 Now that the U.S. Supreme Court has "invented" the Constitutionality of same-sex marriage, about the only institution left to speak for the truth is the Bible-believing church. And the full wrath of the homoactivists will be focused upon us.

Capitulation is almost complete. One by one, state and local governments, universities and colleges, mainline protestants, judges at every level, the White House, legislatures —all have bowed to the homosexual bullies. Their march is under the banner of tolerance, but question their behavior and they quickly prove that tolerance is a one-way street. Full approval is their only goal.

The violence of their knee-jerk reaction was evident early. In 1978, San Francisco passed an anti-discrimination ordinance protecting sexual "orientation." Soon after, a local church found their organist to be a practicing homosexual. Unable to convince him of his sin, they fired him. He sued, based on the new ordinance.

Soon the media stirred the pot and the pastor and church was flooded with obscene calls, letters containing pornography, death threats, and detailed plans to kidnap, assault and murder the church leaders` children. 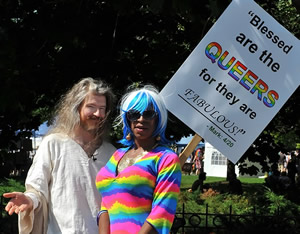 The suit was settled in favor of the church, which only heightened the harassment. Protesters visited the services, defaced the pew Bibles, slammed windows, stalked around the sanctuary shouting. This kind of bullying response has been just below the surface ever since. A few other churches have had similar experiences over the years, but the homoactivists have been so busy consolidating their hold on the masses, that churches have been mostly under their radar.

Now, the only pocket of resistance left to them is the Bible believers. Homosexual New York Times columnist, Frank Bruni, is one who is issuing the call against us: "Christian churches must be made to 'take homosexuality off the sin list.`" He advances the standard line that "science and knowledge," has obsoleted the "...scattered passages of ancient texts" that support the view of "gays, lesbians and bisexuals as sinners."

And that call to violence is being heeded. Just recently came the report of two churches in North Carolina brazenly vandalized. In Jamestown, Wesleyan church members found windows broken, signs pulled up and jammed through the radiator of the church bus. The building had been pelted with eggs, strewn with toilet paper and silly string and tagged with "Gays Okay," and "God hates you" graffiti. The next day the Grace Baptist Church in Greensboro received similar treatment.

The two pastors responded to the attacks with sermon-on-the-mount forgiveness stating that the vandals were just expressing the sin that resides in all of us. However, there was a flavor of "why us?" in their response. This typifies the head-in-sand attitude of too many pastors who failed to see this juggernaut coming down the road.

Homoactivists have succeeded in replacing the biblical truth that sodomy is a choice, with the mantra that they are "born that way." The Christian public bought the idea that if the poor homosexuals were just given space, they would quietly do their thing and we could all coexist in happy freedom of religion.

That is not the character of the demonic spirits driving the men at Lot`s door, refusing Lot`s daughters and demanding to gang-rape the angels. Obliteration was God`s only choice.

For the church today, it is late in the game but we must not just play dead. The gospel is still powerful enough to turn even the hardest heart. Pastors must rise up boldly standing for the power of God`s Truth. And Bible-believers everywhere can saturate their communities with no-nonsense gospel tracts.

Soulwinners, some can still be saved, "those as by fire." We have much work to do.

Other Articles from May/June 2015: