God Not Welcome in Congress? 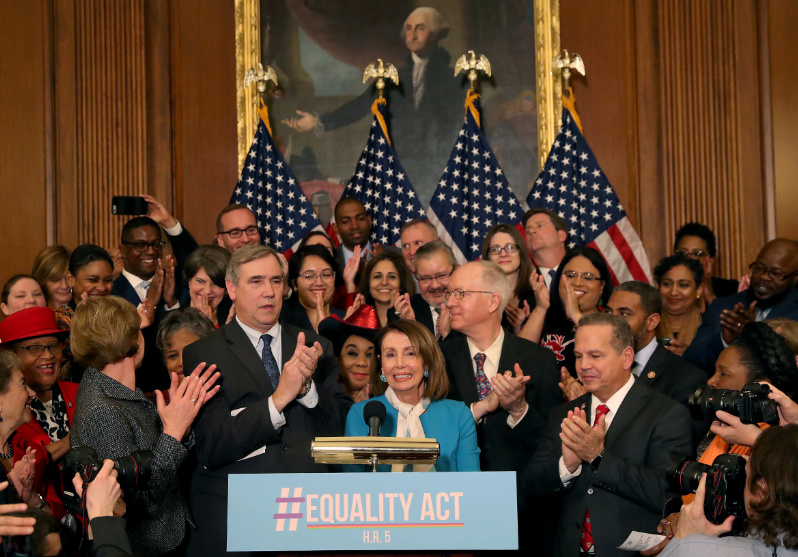 Could it really be possible that the statement below was recently made in a solemn session of the U.S. House of Representatives?

"…what any religious tradition describes as God's will is no concern of this Congress."

The setting: a deliberation on the Equality Act that proposes to elevate homosexual behavior to a special protected status under the anti-discrimination code. Another congressman had just read Deuteronomy 22:5 (forbids crossdressing) into the record to illustrate the Biblical view of transgender deviancy.

The woman shall not wear that which pertaineth unto a man, neither shall a man put on a woman's garment: for all that do so are abomination unto the LORD thy God.

The congressman reading the Deuteronomy verse was specifically targeting the transgender (gender identity) aspect of homosexuality. The greatest concern about the Equality Act is in this area. Making it illegal to discriminate against people who claim they are in the wrong body will disrupt many areas of civil society.

One of those areas that has been getting considerable attention lately is in women's sports. Men who decide they are women in a man's body are winning sports awards in contests against women athletes. The state of Connecticut has approved this foolishness and men have stolen trophies in at least 15 events from the girl athletes. Then the girls must dodge these men in the dressing rooms and restrooms.

Another disturbing aspect of transgenderism teaches children that before they reach puberty they may possibly be in the wrong body. If so, then, “we can sneak you away (sometimes without parental consent) for puberty blockers and later, surgery to make you into the true you. Never mind that it will probably totally destroy your general health and prevent you from ever having any babies.”

But anyone who tries to talk you out of it may end up in jail for performing illegal “conversion therapy.”

Several states have passed laws against any professional counselor who attempts to help someone overcome a same-sex attraction or better to accept their birth sex. If this becomes Federal law, pastors could fear even praying with someone over their sexuality.

Speaking of jail, this Equality Act specifically nullifies the 1993 Religious Freedom Restoration Act that protects churches, Christian owned businesses, and parachurch organizations against lawsuits, fines and imprisonment for refusing transgenders from joining and homosexuals from leadership.

Church leaders are alarmed by a provision forbidding discrimination for gender identity in “any stadium or place of establishment that provides exhibition, entertainment, recreation, exercise, amusement, gathering, or display.” Churches that have changed from “worship services” to worship “gatherings” should note this terminology. Pastors who refuse to officiate same-sex weddings could be sued.

For several years, some Christian-operated businesses have been under attack such as cake bakers and florists who refused service to weddings and ceremonies that they deemed sinful. These are covered by a provision in the Equality Act forbidding discrimination by “any establishment that provides a good, service, or program, including a store, shopping center, online retailer, or service provider, etc.”

Jack Phillips of Masterpiece Cake Shop in Colorado Springs, Colorado has been sued three times for refusing to cooperate in homosexual ceremonies. Florest Baronella Stutsman faced a fine of over 100,000 dollars by Washington state for refusing to create flowers for a same-sex wedding. These were state actions, but the Equality Act would codify these into Federal law cancelling any state freedoms that now exist.

A possible scenario might include a lawsuit against a food service who refuses to cater a transition party for a transgender who then approaches a church for a same-sex marriage ceremony and threatens legal action if they refuse.

When we think of this as absurd, we need to remember that 20 years ago we would not have believed a scantily dressed drag queen reading children's books to kiddies in the local library.

As Jesus warned in Luke 17 that, as it was in “the days of Noah” or in “the days of Lot,” the debauchery would become so widespread that sudden destruction was the only solution.

God demonstrated to Jonah (See "Jonah" by Jack T. Chick on Amazon) His concern for the children in Nineveh (Jonah 4:11). Will He not be equally concerned when we prescribe puberty blockers for 12-year-olds and genital mutilation at 18?

Soul winners, it appears like we are nearing sundown. We have work to do. Churches have slept too long. History shows that tract saturation is a low-cost way to wake up a community.