Lutherans Decided Reformation 'Struggle' Is Over 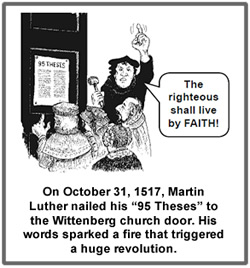 Lutheran officials are joining Senior Roman Catholics to make October 31, 2017 the end of their Protestant "protesting." That date marks the 500th anniversary of Martin Luther`s posting of his "95 Theses" on the door of a Wittenberg church. That event is considered as the beginning of the split from Rome`s counterfeit "church," that released the true gospel to "all nations."

In the joint announcement, they claim that: "The awareness is dawning on Lutherans and Catholics that the struggle of the 16th century is over. The reasons for mutually condemning each other`s faith have fallen by the wayside."

This can only be explained by the descendants of Luther abandoning the Bible. The biblical "reasons" have not changed. That means that either they gave up the Bible or have twisted the meaning —or both.

Those "reasons" included (and still include) worship of a wafer god and the Virgin Mary goddess, and bowing to a pontiff who claims to be Christ`s vice president in charge of all religion on the earth. The indulgences that Luther objected to are still being  handed out as get-out-of-purgatory cards. Alternate mediators are still being installed with Mother Teresa being the latest example.

The article announcing this event cites "ecumenism, globalization and the secularization of Western societies" as the cause for this "celebration." If we understand biblical prophecy, these terms illustrate how we got here and where we are going.

The "secularized" societies have decided they can build heaven on earth without God. Through science and reason they will conquer disease, poverty and even aging and death.

Then, through "ecumenism," all religions will agree on a common teaching and values supported by common literature including a gutted Bible. Thus "globalization" will unite all economies, political systems, and religions, which they hope to merge into a harmonious "global" community. All "fundamentalists" will be charged with extremism and marked for elimination.

Piece by piece, this utopian fantasy of heaven on earth is being assembled. But the preserved Bible that we have today says that it won`t happen. It speaks of the spirit of anti-Christ that is behind all this humanistic maneuvering. Then, at last, the incarnation of that spirit will emerge as the beast out of the bottomless pit.

But how do we know that? Because we have the KJV, a complete Bible, one with a solid history of God`s promised protection of His word. The creeping confusion of modern Bibles is well along toward producing the gutted one world Bible that will support that one world religion. But the PR campaign against the Classic English King James has almost succeeded in the minds of even the "Protestants."

So, should Bible believers join the 70 million Lutherans who belong to the Lutheran World Federation in calling for the end of Protestantism? Is there really nothing to "protest" any longer, as Paul Crouch declared several years ago on TBN?

The celebration statement claimed that "belief in Jesus" was enough for unity. But is the Roman wafer Jesus the same as the Biblical Christ? Should we repoint our prayers to the Mary goddess and hundreds of "patron saints"? Shall we give up the assurance of salvation through Christ`s finished work on the cross for a hope-so eventual exit from purgatory?

Sorry, Rome hasn`t changed. These "sheeple" Protestants have abandoned the Biblical Jesus for sweet ecumenical wine. God commands us to come out of this counterfeit, prostitute "church," to avoid suffering her plagues on judgment day.

The chick.com web site has many books and tracts exposing this winsome whore who drank the blood of all the martyrs in history. See also Rev. 17 and 18.