Why Mutilate the Body? It's About the Soul!

The current dust-up over forcing ladies to accept men in their restrooms and showers is causing a lot of rethinking. This, in addition to recent stories of young children receiving hormone treatments to change their gender.

Trevin Wax asks a number of questions in an article on The Gospel Coalition website entitled "7 Troubling Questions About Transgender Theories." One question illustrates Satan’s central strategy to lock in the people caught in this bondage. 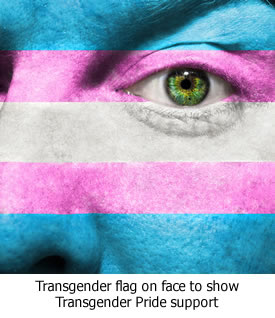 Wax’s question number 3: "When a person feels a disjunction between one's sex at birth and one's gender identity, why is the only course of action to bring the body into closer conformity with the person's psychological state, rather than vice versa?" In other words, why is it necessary to alter the features of the body (by hormones or surgical mutilation), instead of the beliefs of the soul?

Wax is referring to the practice of hormone therapy and surgical sex change rather than dealing with what is clinically known a “gender dysphoria.” In fact, several states have been pressured to outlaw any attempt by professional therapists to help troubled children recover from this dysphoria (confusion).

Satan knows where his weakness is in this debate and is attempting to close the door to lock these slaves into this destructive life style. By convincing governments to pass laws against professional counseling, this is only one step away from outlawing witnessing to homosexuals. This will likely come about when it becomes a hate crime to approach someone about God's biblical view of this sin.

God does not leave any room for debate on any sexual identity outside of male and female based on birth. A definite division even on clothing is clear in Deut. 22:5 so that there is no confusion introduced into society.

The whole "sexual revolution" has occurred because the culture has come to approve all kinds of unbiblical sexual activity. Mankind’s natural curiosity and fallen nature wants to explore whatever the culture provides or approves. Therefore, if sin becomes legal, and the culture approves it, even young children have no defense, especially when the parents are willing to fund the hormone treatment.

Satan does not let up until all doors are shut against the gospel. That is the end game of the homosexual steam roller. Toleration is not the goal; only full approval. All objection must be silenced backed by the power of the state.

Yet, the gospel will never be completely silenced. As soul winners, our mandate is basically one-on-one. The Kingdom that we serve, is bigger than any earthly province. We must stress that “gender dysphoria” is curable by the blood of Christ. No need to change the features of the body. When the heart is renewed, the body will be fine.

We cannot, however, overlook the role of Satan’s henchmen. As emphasized in the Chick tract, Home Alone, demon involvement must be addressed by the power of the Holy Spirit. As Wax points out, this is not about the shape of the body, it is about the condition of the soul. Yet, modern psychology, without spiritual rebirth, has proven ineffective, to the point that homosexual behavior has been declassified as a mental disease.

Soul winners should welcome any help from the government in curbing this sin and protecting our freedom to witness. But the final solution is a new creature in Christ, one lost soul at a time. In our darkening culture, we must soberly pray for greater compassion for those in this bondage, and more opportunity to share how God’s genuine love can satisfy where Satan’s counterfeit cannot.

Any general tract can reach a homosexual, but here are a few suggested titles:

Rejected by his family, unemployed and with no one to turn to, Jimmy was ready for suicide. But then he met the One who truly loves him.

And It Was Good!

How did we get here? It all started in a garden.

Through Adam and Eve, sin entered the world. Jesus is the only one who can remove it.

Your soul is the real "you." Do you know where "you" are going?