Why Is Islam So Dangerous? 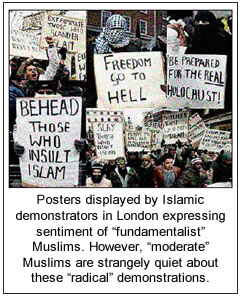 Islam is dangerous because Western man assumes it works by the same ground rules as the Judeo-Christian culture. But it doesn`t. Islam`s code of ethics was born in the caldron of seventh century middle eastern tribal warfare.

Although we have strayed in recent years, our society is still rooted in biblical concepts. Obedience to the ten commandments ensures a peaceful culture with maximum personal freedom.

A brief comparison with Islam produces a striking difference. Jesus` summary of the ten commandments reveals a loving God worthy of a loving, whole-hearted response. Allah is an inscrutable deity too capricious for genuine respect, much less ardent devotion beyond dry rituals and blind obedience.

The balance of the ten is embodied in the command to love our neighbor as our self. Islam`s definition of "neighbor" is vastly different from the Bible`s. No "love" is allowed for anyone who does not join the tribe of Islam. Instead, he is an enemy of Allah and subjected to slave status or executed outright.

Well-meaning Westerners, ignorant of Islam`s global goals, fail to understand some of the terms used by Muslims. Islam`s world view is summed up in two phrases: dar al-Islam, realm of Islam, and dar al-Harb, realm of war. In the realm of Islam, all members are in full submission to Allah and subject to sharia law in all their activities.

The other phase: realm of war is just that, Islam is basically at war with the rest of the world. And since Islam operates on tribal warfare rules, the rules of engagement can be a mystery to the Western mind.

We have desperately tried to segment Islam into the "moderate" and "radical" wings. This fits the Western "multicultural" perspective. But in Islam, the fringe element is not the radicals but the moderates who must fear for their lives if they stray too far from the interests of the tribe.

When Islam puts on a moderate, peaceful, loving face, it can only be for the purpose of Taqiyya. That is the Muslim doctrine that it is permissible to lie and deceive the members of the "realm of war," if it advances the cause of Islam.

If you consider the horrors committed by Muslims against non-Muslims in the last few decades, it is obvious how this world view plays out. When you connect the drive for global conquest with the promise of infinite pleasure in paradise, suicide bombers and overwhelming immigration infiltration make sense.

In the new tract, Camel`s in the Tent, Jack Chick illustrates the insidious tactics of Islam in its war against the rest of the world. Many think that "terrorism" is Islam`s main tactic. And, since we have not seen any recent major terrorist attacks, then we are winning the "war on terror."

But we are ignoring the war of infiltration. By taking advantage of the West`s "tolerance," Islam has opened another front in the war. This is basically a war of religions. It`s their god against our God. But the West has bought into humanism and eliminated the God of the Bible. Humanism`s main tool is democracy to solve the world`s ills. But when Muslim voters outnumber the others, then sharia will become law.

Bible believers, we are the only hope. Without a true, widespread revival we are doomed. Chick Publications is dedicated to giving you the most effective tools to promote this awakening. The two tracts, Camel`s in the Tent and Skylighter expose the insidious plans and devilish methods of Islam`s march for conquest of the world. Either we have the courage to warn about this danger or we lose our precious freedom to spread the gospel.

Other Articles from July/August 2012: