Tips From the Street

Tim and Mike work out of a base in "sin city," Las Vegas, Nevada. They have a goal of 300 tracts a day seeded into the immense crowds there. To do so, they have developed a number of tactics to get tracts into the hands of often-reluctant people.

One of the easiest places is at a gas station. People are simply waiting for the tank to fill, so have time to read a little or chat. Does it work? Tim relates one instance where a motorcycle rider was gassing up and received a tract. A little later, as Tim was about to drive away, the rider came running up shaking his head. It turned out that he was Roman Catholic and had received the tract, Last Rites. He explained that he had been contemplating suicide but the tract spoke to him and he wanted to know more. Tim asked, "Have you ever trusted Jesus?" The answer was no, and Tim led him to faith in Christ right there in the driveway. 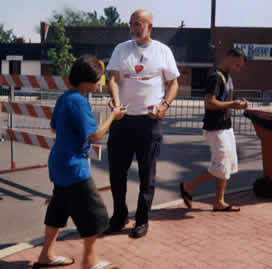 He will carefully observe the individual and try to find some point of contact. But a warm smile is essential along with a friendly comment. One example is when he visits a Muslim community or festival. Working quietly as an ordinary visitor, he uses the Arab language greeting, "As-Salamu Alaykum (pronounced, aah suh laah mu aah lay kum) which means "peace be upon you" to make initial contact before he offers the tract. Even here, his success rate is high. 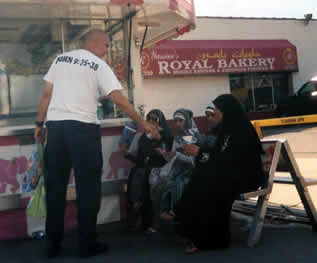 For the bolder soul winners, Tim makes this suggestion: Go to the local police station and ask, "Where is the most dangerous part of your city?" After spreading tracts in several such areas, he has found that the gang members respect that sincere boldness if it comes with obvious compassion for the lost. However, he admits that he only visits these neighborhoods in the day time. He has found that gang protocol usually will not try revenge on someone who leaves the gang to become a genuine Christian. But, like the Mafia, if they turn out to be a hypocrite, they become a special target.

He is continually on the lookout for places to stash a tract such as in a magazine at a checkout stand of a grocery store or the hand of a Virgin Mary goddess statue.

Tim and Mike have obviously overcome the hurdle faced by most Christians of having a tract available in the short moment when an opportunity appears. Some use clothing with multiple pockets, or purses, backpacks or fanny packs. Sometimes, if you don`t have a tract actually in your hand, the opportunity escapes.

Everyone must work out his own system, but Tim and Mike have succeeded in delivering hundreds of tracts a day. God is the Master Creator, but we are made in His image and need to apply our creativity to reaching as many as possible while we have the freedom.

Other Articles from November/December 2012: