Mormonism Starts PR Campaign to Dress Up Its Image 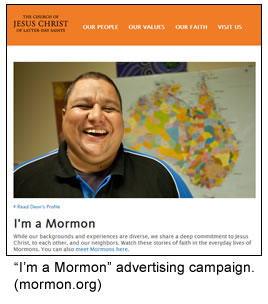 Because Mormon candidates are showing up more frequently in elections, controversy is arising whether their beliefs will influence their governing. To counter the negative questions, LDS Mormon leaders have hired two nationally-known advertising agencies to prepare a multimillion-dollar television, billboard, and Internet advertising campaign to dress up their image.

Mormons claim that they believe in Jesus Christ, read the Bible and consider themselves Christians. Yet many in this country are unaware that they have other books than the Bible, such as the Book of Mormon, that teach doctrines contrary to Scripture.

For soul winners, the political issue is not nearly as important as the fact that Mormons are victims of a false religion. This is most evident in their teachings about Jesus Christ. Richard and Cindy Benson point out in their book, Secrets Mormons Don't Want You to Know, that the Mormon Jesus was born of Mary, God's wife, through physical contact. Jesus had to be baptized to gain admission into the celestial kingdom, that He was married to multiple wives including Mary and Martha, that He begat children and was crucified for being a polygamist. The Mormon Jesus was one of many gods and earned his way into godhood like any good Mormon can do. Also, Jesus and Lucifer were originally brothers.

This book includes over 150 "secrets" that thoroughly prove Mormonism to be non-Christian. Subjects include Joseph Smith's false prophecies, unbiblical salvation, baptism for the dead, temple garments, polygamy, marriage for eternity, the masonry connection, and sins that deserve instant death.

A section of the book includes Cindy Benson's story of growing up in a polygamist Mormon family. She describes her early Mormon training, Mormon marriage, and her desperate attempt to prove to her husband, who had become a Christian, how Mormonism was superior to what he had come to believe. Benson's book even describes how a Mormon will attempt to cover-up the truth about Mormonism's beliefs when confronted by some of their bizarre teachings. Chick publications recently published another in their series of Crusader's Comics on the subject of Mormonism. Called The Enchanter, it focuses on the life of Joseph Smith. It describes how he was born into a family deeply involved in witchcraft and magic. He carried on the family tradition by becoming known for hunting buried treasure by looking through a peep stone. At one point he was arrested for being a fraud.

It shows that his claim of discovering golden plates buried near his home was only a massive bait-and-switch maneuver. He managed to fool enough people to develop a following of several thousand.

Primarily because of their practice of polygamy, they were forced to move, first to Missouri and then to Utah. Joseph Smith was finally killed in a gun battle in his attempt to escape from jail. But his transcription of the writings on the fictitious golden plates became the book of Mormon. Over the years additional books have been written by Mormon leaders and became part of their doctrine. Benson's book gives a good overview of these doctrines. The modern PR campaign by Mormonism to claim that they are truly Christian and worship the Jesus of the Bible is a sad distraction from the truth of this false religion.

Their bondage is so great that it is very difficult to witness to a Mormon. Chick Publications also has a tract, The Visitors, that briefly describes some of their stranger teachings. It can be very effective in inoculating a neighborhood against the efforts of Mormon "missionaries." And sometimes it even opens the eyes of one of them.