False Forgiveness from a Woodshed 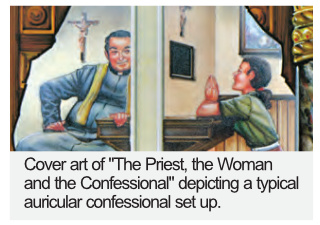 To get around the coronavirus restrictions, one ingenious local priest in New York purchased a plastic shed from a local hardware store and modified it with a side window, similar to the standard veiled confessional booth. With this “confessional” placed outside the church, people can kneel or crouch and confess their sins to the priest inside who tells them what works they must do to be forgiven.

The restrictions and pressures of the coronavirus pandemic have shown, again, that popery is basically pagan and not biblical.

Roman Catholic sinners are not encouraged to confess directly to God for forgiveness. This false church has made sure that their people cannot so easily escape their tight system of spiritual bondage.

Just as their “Jesus” is still hanging on the crucifix waiting to be dispensed as a wafer-god in communion by a priest, forgiveness comes not from our risen Advocate, Jesus, but from an “ordained” member of the power structure.

So, what is wrong with this picture?

If you believe the Bible to be God’s final word on the subject, nowhere does He give man permission to forgive sins (absolution). Catholic teaching relies on John 20:23 for their authority to absolve other people of their sins. Nowhere in the New Testament do we see the apostles acting on this interpretation. Nowhere in the Bible does it instruct or even permit man to go to another man for forgiveness from God. Jesus is the only advocate that we are given (1 John 2:1) and the only mediator (1 Timothy 2:5).

It is of note that the NIV and ESV take the Catholic interpretation of this verse, giving the apostles full authority to forgive sins.

As the threat of the pandemic progressed, Pope Francis attempted several ploys. He went to two shrines near the Vatican to pray to the Virgin Mary goddess. This illustrated Catholicism’s elbowing Jesus aside and replacing Him with a goddessified perversion of the humble mother of our Lord. Again, ignored is 1 Timothy 2:5 that Jesus is the only mediator.

Then the pope conceded that the people could go directly to God for forgiveness, but only with proper “contrition” and immediately return to confession and Mass as soon as possible. In effect, this was nullified by a pronouncement that he would personally grant a “plenary indulgence,” supposedly canceling all guilt for everybody who practiced proper “contrition.”

Some would argue that “contrition” is equal to “repentance,” but the lives of so many Roman Catholics demonstrate otherwise. They appear at the veiled window of confession to say: “I’m sorry,” receive a bogus forgiveness from the priest, and continue on, ignoring God’s true redemption.

An additional event illustrated another of the pope’s violations of scripture: a rare display of the Shroud of Turin. This is a 14-foot-long length of cloth that supposedly wrapped Jesus in the tomb. Catholics get as close to relics like this as they can, hoping it will give them a blessing or a miracle in return.

As is the practice with many relics, it is only opened for public worship on rare special occasions. The distress of the coronavirus appears to qualify. The Archbishop of Turin recently opened the chapel for public “adoration” with the pope’s approval.

This focus on “public adoration” is an unbiblical misplacement of trust. Instead of faith in the finished work of Christ on the cross, Catholicism teaches that merit toward salvation is accrued by this worship of idols, even though they have another label for it.

Most of the “Protestant” world has bought the lie that Roman Catholicism is “just another denomination with an alternate worship style.” In this counterfeit “church,” Satan has succeeded in embedding his most effective lies: salvation by works, goddess mediation, worship of idols, prayer to a pantheon of gods (saints), a hierarchy of priestcraft, infallibility of the cult leader (pope), replacement of the doctrines of God’s word with man’s dogma, just to name a few.

Please visit www.chick.com or call 909-987-0771 for more information. Books related to the subject include The Priest, the Woman and the Confessional, 50 Years in the ‘Church’ of Rome, and the Crusader Comic: Big Betrayal.

Other Articles from May/June 2020: