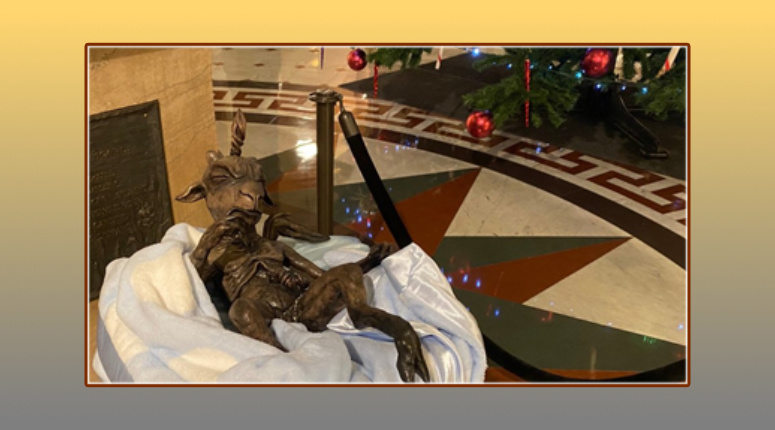 CAPTION: The Satanic Temple has installed a 'Baby Baphomet' holiday display at the Illinois State Capitol.
----------


This year, while protestors watched, members of the Satanic Temple of Illinois installed a “Christmas” display alongside baby Jesus in the state capitol in Springfield. A Temple press release stated, “This year’s tradition marks a greater urgency in the Baphomet’s message of harmony and reconciliation.” To emphasize the “harmony,” a “horror artist,” Chris Andres, of Albuquerque, was engaged to design the infant Baphomet idol. The word “unity” appeared in another statement of purpose.

The Satanic Temple (TST) claims to be a humanist organization, headquartered in Salem, Massachusetts. This is not the first such display in the Illinois capital. In 2019, TST installed one titled “Knowledge is the Greatest Gift,” featuring the serpent deceiving Eve in the garden of Eden.

TST has tried other ploys, including an attempt to install a statue of Baphomet in Arkansas, but is best known for its attempt to sneak abortion into a religious exemption to the Texas anti-abortion law. The argument was that they had developed a religious ritual in their worship, a part of which included an actual abortion.

Their claim was that because all religious rituals are guaranteed by the constitution, this permitted abortion under any circumstances, as long as it was performed during the verbal mumbo-jumbo of their ritual ceremony.

This is another display of Satan’s word games. Given his basic motive to “steal, and to kill, and to destroy,” (John 10:10), the TST’s use of “harmony,” “reconciliation,” and “unity,” must have entirely different connotations. Satan would love to “harmonize” mankind’s rebellion against God. “Reconciliation” has got to be everybody joining together and worshipping the devil. And “unity” would be achieved if everyone were dead.

Soul winners, this is just additional evidence that we have more work to do.

Chick literature can help. Although Baphomet is emerging in other expressions, it has historically been most associated with Freemasonry. The tract, That’s Baphomet gives some background in the concept of Baphomet as well as its role in Freemasonry. This is backed up by a paperback book, Should a Christian be a Mason?, which has an entire chapter on the role of Baphomet in the history of Freemasonry. Both are available at www.chick.com or by calling 909 987 0771.