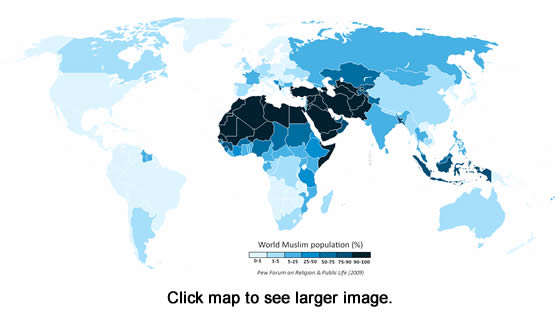 The Western World`s optimism over the "Arab Spring" is fading. It is becoming increasingly clear that Islam, not democracy, will be the winner. And in the effected countries, it is rapidly turning into a "Christian Winter."

Military response to Islam in Iraq and Afghanistan, has only succeeded in eliminating what Christian influence there was. Under Saddam Hussein, the Iraqi government more or less guaranteed the safety of a "Christian" population that was figured at about one million. Now, about half of these have fled the country as the war allowed Islamic radicals to target them.

Before the uprisings in Egypt, 10 percent of the population claimed Christianity. But with a Muslim majority, the "democratic" elections are building a new government that is Muslim dominated and determined to install Islamic law which forbids all Christian activities.

In Bethlehem this Christmas, tourists were welcomed because of their money, but for a town that was nearly 100% "Christian" just a few decades ago, it now has a Muslim majority. Unfortunately, Bethlehem is not under Israeli control but is part of the Arab "West Bank," thus explaining the loss of Christian inhabitants.

Each year, the missionary organization, Open Doors, charts the persecution level in some 60 countries. North Korea tops the list each year, but most of the top 10 are Islamic. Even with the presence of U.S. troops, Afghanistan is number 2 and Iraq is number 9. Saudi Arabia is #3 and Iran #5.

Overall, the persecution in Muslim-dominated countries increased since the previous survey last year. The long-running war in Sudan between the Muslim north and "Christian" south resulted in the south voting to secede and establish their own nation, Southern Sudan. As a result, the remaining northern nation is tightening restrictions on Christians and their position on the Open Doors list moved up 19 spots to #16 in just one year.

"Being a Muslim-background believer or 'secret believer` in a Muslim-dominated country is a huge challenge. Christians often face persecution from extremists, the government, their community and even their own families," states Open Doors.

Nigeria is considered the most brutal, with 300 martyred last year that we know of for sure, and the number is believed to be double or triple that. Since 2009, 50 churches have been destroyed and 10 pastors killed.

The Western World seems to be helpless in the face of this new Muslim determination to conquer the world for Allah. European governments, dedicated to "multicultural tolerance" have allowed immigrant Muslims to dominate whole sections of their cities, even establishing sharia laws and setting up Islamic courts and financial centers.

Polygamy and honor killings are increasing in these areas, some of which have been designated "no-go zones" by police. And the U.S. is also failing to recognize that large Muslim families are using western freedoms to rapidly swell their population, and thus their power.

And we are largely defenseless against this kind of attack. Muslims claim, and rightly so, that the West has become decadent, with no beliefs worth defending.

America has capitulated its Christian heritage to godless humanism which is toothless against this militant religion. The gospel is the only weapon effective against Islam. Chick tracts, Is Allah Like You?, and Allah Had No Son, and books such as, Christ, Muhammad and I, Anatomy of the Qur`an and Who Is This Allah? have proven effective tools in both leading Muslims to the Lord and educating soul winners, and others, about Islam.