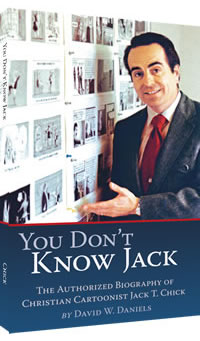 While Jack Chick was alive, one news reporter claimed that he was likely the most widely read living author, based on nearly 900 million copies of his gospel tracts printed and distributed.

The centerpiece of Jack’s 150 titles was "This Was Your Life", one of the most widely read gospel tracts in the history of the world. It was translated into most of the major languages of the world —and many minor ones.

Many wondered, “Who is this JTC?” Jack chose not to answer, studiously avoiding the glory that he believed belonged to his Lord.

David W. Daniels was Jack’s collaborator in tract writing in the last 16 years of Jack’s life. He tells of a far different man from Jack’s detractors, who tried to paint Jack as a purveyor of hate, who routinely consigned sinners to a burning hell.

It is a fitting tribute to a reclusive man, gracious, self-effacing, and generous, but with laser-like resolve to advance the Kingdom of God —one simple gospel tract at a time.

Based upon material researched and presented on our YouTube channel, from the You Don’t Know Jack video series.